Karen Day is a very successful writer, photographer, and filmmaker because she made it happen.  She is always working on creating a successful future for herself.  She focuses on humanitarian issues in exotic locales like Afghanistan, Cuba, Myanmar, pre-war Iraq, pre-Madonna Malawi, Hollywood, and Washington, DC.  They’ve offered her exciting opportunities to dodge bullets and write for national publications like More Magazine, O, The Los Angeles Times, and The Pentagon. 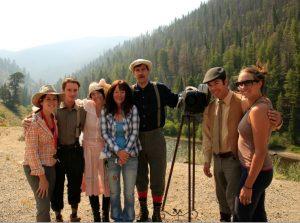 Director Karen Day on location with cast and crew from “Nell Shipman: The Girl From God’s Country”

Winner as writer and producer of the Roy W. Dean Grant for Nell Shipman, The Girl from God’s Country, she joined me on my The Art of Film Funding Podcast.  She offered advice to independent women filmmakers just starting out on which we both agreed.

While it’s important to seek out others for advice, independent filmmakers need to take active control of the future of their own work to have a successful career and to make any money.

Karen says one of her real joys is being able to mentor women, young women beginning their career in filmmaking. “It’s a real tipping point right now in the industry. There’s so much opportunity. And it’s difficult to find a mentor.”

“But, Carole, you know better than anyone, and I think you’re one of the major voices in how to manifest and believe in yourself that you can get things done. I call it the Harry Potter effect. I put my mind to an idea and start whipping results out of the ether. I might as well have a master wand.”

This is very true.  Karen realizes that your faith in yourself and in your film is paramount to a successful production.  Your attitude towards yourself and your film must always be of the highest level as you deserve to be funded.  Belief and faith will carry you a long way in the film industry “and make doors open where there were no doors before.”

The Dark Web of the Film Festivals

Karen was at Raindance Film Festival with her latest film Bamboo and Barbed Wire, a documentary that chronicles the life of a 17- year old Syrian refugee girl in Idaho.  She says that Raindance is a premier festival and they give filmmakers an amazing amount of support. There are distributors there from around the world.

But, she warns, don’t assume that just by getting accepted and networking will get you a deal for your film.

“It’s a good way to meet people and make connections, but it’s not as simplistic as it appears. Film festivals and film distributors are in the business of making money on movies, and producers and writers and directors and cinematographers are in the business of making movies. And it’s a hard lesson to learn that there are two different businesses.”

She is right.  The distributors want to buy the film for the cheapest price possible and filmmakers think they will get prices near what was quoted in Variety for recent sales.  However, these prices are normally exceptional prices.  Distributors and Netflix and Amazon are paying low prices unless you have a known actor in a feature or a documentary.  In that case, it’s a bit higher but not what they were paying a few years ago.

The information I get from our fiscally sponsored filmmakers is that by the time they get to a festival, usually they are tired from years of producing and are ready to let go of the film.  Once they get an offer, they are so excited that someone loves the film and wants to help, that they often make poor decisions.  Distributors are offering egregious contracts and very low up-front money these days.

Finding Out What Your Film is Worth

Because of the horror stories I have heard from filmmakers about bad contracts, distributors not complying with contracts and people selling their film for 20% of the cost, I started a search for who is paying what for films.  That search turned into a blog.

It’s very important that we know the current selling price for docs and features. So, if you want to share any information on what the current prices are for films and docs, please contact me.  All info will be kept confidential.

Karen says that going to the festivals and talking to other filmmakers is the best way to find what happened to other filmmakers, what prices they were paid, who are the worst distributors and who to watch out for.  You won’t find this information in print, only word of mouth or in our blog talk shows where some filmmakers will offer up the truth about their poor distribution deal.

Find Leverage with a Film Distributor

Karen said that getting a distributor as an independent is not always what you thought it would be. Often, people think that a distributor will change your life.  You need to know what money you can make and you need leverage to negotiate.

“The one thing I can say is, if you do have a distributor that’s interested, immediately contact several distributors to see if they will be interested.  Because then, you have more power to negotiate a minimum guarantee.  Number one thing I say to independent filmmakers is, your MG, your minimum guarantee with the distributor may be the only dime you ever see.  So, make sure that you negotiate that.   And the best way to do it is to get more interest than one distributor.

“I did that, and so I was able to negotiate more money than I was originally offered. And I naively thought, oh, well, this is going to be a cakewalk now.  But what’s true is my distributor is in the business of making money on movies, and they’re like a shark. They have to keep moving to pick up more films and compete with all these distributors to find the next great documentaries.

Be an Advocate for Yourself

“I literally had to become a thorn. I’ve been working with the major network media for a long time, so I know what it’s like to push. And some people don’t have that advantage, because I’m older, too. It’s not like I’m 20. I’ve been around the block, as they say, about 4,000 times.

“The bottom line is, none of it’s easy. It was a daily process of what are you doing, what’s happening? Otherwise, you seep into the carpet and you’re thinking, oh, it’s going to happen for me. Mm-mm (negative).

“I can definitely say there have been a couple of great films. The great film Sonita, which is about the Afghan rapper who escaped an arranged marriage. Somebody was doing a documentary on her and they bought her out of the marriage.  It won an Audience Award at Sundance, and it was sold to PBS National.  I can’t divulge how much it was, but I would say it’s not enough to buy a used car.

“I really feel that the art of film negotiation is the number one thing, and the art of film funding. You have to be your own best advocate, and you just want to say, ‘Oh, I’m an artist.’ Well, you can be a starving artist all you want, but you better learn to be a business person too if you want to make a living at your art.”