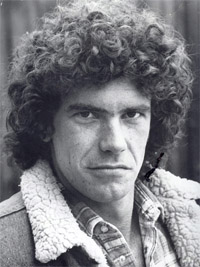 An accomplished actor, he starred in over 25 movies and was featured in 30 others. His forte in films was tough, hard edged characters that he imbued with a depth and humanity that made them all the more frightening. The titles of some of the movies he starred in belie some of the characters he played in them such as 1989’s “Nam Angels”, 1991’s “Naked Obsession”, 1992’s “Peephole”, and his tour de force holding denizens of a strip joint hostage in 1995’s “Stripteaser”.

The uniqueness he brought to sometimes standard tough guy roles made him a favorite of Roger Corman.. Some of the films that he enlivened with his presence include 1994’s “New Crime City”. 1995’s “Carnosaur 2”, and 1995’s “Black Scorpion”.

While his films may have highlighted his dangerous persona, it is in his stage work that Rick drew on a more tender and sometimes more complex side. He was well known for originating roles in numerous Padua Hills Playwrights Festivals for outstanding local and nationally known playwrights. Rick won best actor awards for “Kindling” and for playwright Leon Martel’s “Farmyard”.

He was also a favorite of avant garde playwrights John Steppling, Shem Bitterman, and Dan Golden who used him whenever possible. Rick’s innovative work as a theater director garnered awards, deep felt thanks, and praise from fellow actors. Even when not directing, Rick graciously spent as much time as he or an actor felt necessary to make the role unique and their own. He devoted much of his time to selflessly help in any way to add to or improve the performance of others.

During his time between scenes and jobs, Rick became an accomplished self-taught artist. His compelling, stirring, and humorous work was uniquely and boldly his own. The darkly colorful pastels he created in many ways abstractly mirrored the roles he portrayed on screen and explored the psyche from which they exploded. His work has been featured in films, local galleries and is in much demand by friends and collectors.