Carole Dean, president of From the Heart Productions and founder of the Roy W. Dean Film Grant, has been chosen by TheWIFTS, The Women’s International Film and Television Showcase, to receive their 2012 Lifetime Achievement Award.

“I thank TheWIFTS, for this tremendous honor that has gone to so many exceptional women”, commented Carole Dean. “My goal has always been to help others stand out and get the awards while I sit back and watch proudly. This is a strange, new, but wonderful experience for me.” 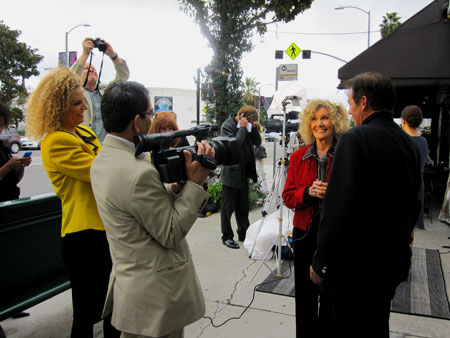 All photos by Peter Hungett

Founded in 2008, The Women’s International Film & Television Showcase is dedicated to increasing public awareness of the accomplishments achieved by women whose unwavering dedication to their aspirations transcends economic and cultural divides to effectuate lasting impressions on society.

TheWIFTS Foundation International Visionary Awards honors women from all walks of life who continue to “raise the bar” in their respective fields and brings them together through the Art Form of Film and Television, the 21st century visual Communicator.

In the 1970’s, as founder of Studio Film & Tape, she pioneered buying back from production and reselling inexpensive film stock which helped spark the independent film industry in the 80’s. Filmmakers such as Roger Corman and John Cassavetes could now afford the film they needed to make their movies.

In 1992, she created the Roy W. Dean Film Grant to aid filmmakers with projects that are unique and make a contribution to society. Now in its 30th year, it has provided over $2,000,000 in production services to aspiring filmmakers and spawned numerous award winning documentaries that might have otherwise never been made.

She founded From The Heart Productions , a 501(c)3 non-profit dedicated to helping filmmakers get their projects funded and made.  Besides providing funding through the grant, they offer film fiscal sponsorship to filmmakers.  This allows donations made to films they sponsor to be tax deductible.  From The Heart has helped independent filmmakers raise over $30 million through it’s fiscal sponsorship program.