…the woman behind the Roy W. Dean Grants

As a little girl in Texas, Carole dreamed of movies and movie stars as she traded fan magazines with friends. When she made it to Southern California in her first job, she fell in love with the Hollywood scene on her first date there. Married to a cinematographer, she got to be around filmmaking and was fascinated by it. But, bored at home with a young child, lots of free time, and a brilliant untapped mind for business, she figured out a way to become part of the film industry herself. What she created helped many filmmakers get started and nurtured a burgeoning independent film industry.

Watching an assistant cameraman on a shoot reload a camera, Carole wondered what happened to the roll of film being set aside for the new roll. Told that the unused 400’ of film was now trash, Carole figured out a better use for it. Knowing that many of her filmmaker friends were desperate for film stock that they could not afford, she borrowed $20 from her husband to see if she could buy what she called “short ends” and sell them. She drove down to Columbia Pictures, talked her way in, and bought 3,000’ of leftover film after they laughed at her and earnestly tried to talk her out of throwing her money away.

That $20 investment in unwanted film stock grew into Studio Film & Tape. The company bought film stock back from studio features, television shows, and commercials. Then, that film found its way in to the hands of hungry independent filmmakers and student filmmakers. It gave filmmakers like John Cassavetes and Roger Corman the opportunity to put on film their dreams and fantasies that otherwise might have never gotten made. Studio Film & Tape grew into a $15 million a year business with offices in Hollywood, New York, and Chicago. Due to its success in promoting film stock, it was given the national dealership for Fuji motion picture film. Soon, Fuji became the choice for independent feature filmmakers and Studio Film & Tape became the largest independent motion picture film dealer in the world.

Always looking for new challenges, Studio Film & Tape became the largest resellers in the country for Maxell, Fuji, and Sony tape stock. While selling tape stock, Carole discovered that it could be recycled as well. She was a pioneer in evaluating used tape stock and making it suitable for resale. Her efforts not only created another industry and market for used tape, but helped save the environment as well before most people were even aware it needed saving.

While running Studio Film & Tape, Carole started From The Heart Productions. With an interest in alternative medicine and spirituality as well as bringing that information to others, she produced “Health Styles” for local cable television. With her as host, she interviewed Deepak Chopra, Dr. Andrew Weil, Dr. Caroline Myss and many others for the first time. These shows were eventually purchased by Oasis Cable. Another show featuring filmmakers is now housed in the national archives.

The Eyes on Conservation Podcast: Passion, Confidence and Persistence – Carole Dean on How to Become a Successful (and well-funded) Filmmaker

In 1992, she began the Roy W. Dean Film Grants. It was named in honor of her father who worked at the company and liked to make “grants” himself of film stock to needy filmmakers. The Roy W. Dean Film Grants award film and film services to filmmakers with projects that are unique and make a contribution to society. The grants do not go to finished films, but to filmmakers beginning or in the middle of a project that need help completing it.

With over 38 grant winners to date and over $2,000,000 in donations, some of the film industry’s most promising newcomers have been helped by the grant. Grants are available three times each year. Besides help with production and post, applicants receive a personal consultation from Carole to guide them in improving their raising funds for their project. 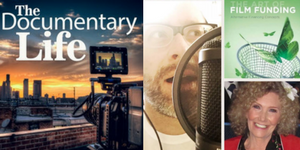 From her base in Oxnard, California, her love for helping filmmakers keeps her to running the Roy W. Dean Grants, From The Heart Productions fiscal sponsorships, continually updating The Art of Film Funding, mentoring filmmakers, and blogging about manifesting your dreams and reaching your goals. Sometimes, she gets lunch.

In 2005, From The Heart Productions began working as a fiscal sponsor for filmmakers. From The Heart is a 501C (3) nonprofit so all donations for each production are tax free. She keeps the fees low so as much money as possible ends up in the hands of the filmmakers. She gives all the sponsored films personal attention with free advice on creating their proposals for investors, their pitch, and their trailers.

From her base in Oxnard, California, her love for helping filmmakers keeps her to running the Roy W. Dean Grants, From The Heart Productions fiscal sponsorships, continually updating The Art of Film Funding, mentoring filmmakers, and blogging about manifesting your dreams and reaching your goals. Sometimes, she gets lunch.

For information on fiscal sponsorships through From The Heart, please check out…https://fromtheheartproductions.com/what-is-fiscal-sponsorship/