I was introduced to the law of attraction and learned that I could accomplish anything I put my mind to as long as I could imagine it and believe it, having faith that it could come true.. 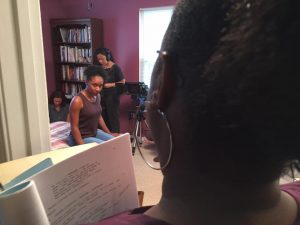 In 2012, I was digging around my home office and found a short script I had written eight years earlier when I was a Senior in college. It was a contender for my thesis film, but I had decided to put it away until later because it would have been a nightmare to find a location for it since the script was based on my first hospitalization for Schizoaffective Disorder, and I was taking a full load.

It was now years later and I had just started my production company when I found this script. I had always planned to do three shorts before I made my first feature film and the third short was always meant for the festival circuit. I would definitely need money to do this, and I had none.

I didn’t quite know how I was going to do this, but I had an idea of where I would get the money. For my second short film, I had gotten a grant from the philanthropic arm of a major telecommunications company. So I decided that I was going to get the financing for my third short film from another big company as well.

During the summer of 2012, I was introduced to the law of attraction and learned that I could accomplish anything I put my mind to as long as I could imagine it and believe it, having faith that it could come true, and that when you have a dream, the universe moves people and circumstances to give you what you want. Because I didn’t know how to get a fiscal sponsor so I hadn’t made any attempts to get one, having so many other things that needed to be accomplished when making a film and building a team. Instead, I was applying for grants that could be awarded to individuals so I applied for the Roy Dean grant and let it go.

Several months later, after I had forgotten that I had even applied for the grant, I got a call from a woman who identified herself as Carole Dean. She told me that I while I did not get the grant, I was a good writer and she wanted to give me fiscal sponsorship. I took this as the first sign from the universe that I was going to get the project done.

I had already missed the 2012 deadline to apply for a grant from the company from which I was sure that I would get the money, so I had to wait for the 2013 deadline. When 2013 rolled around, I applied for the grant and was denied. I didn’t even bother to ask why. However, I reached out to the company again three years later, after two failed indiegogo campaigns, and this time, I got a call from a woman who remembered my application from a few years earlier and told me why they had rejected my application. So, I corrected that item and this time got it approved, even though it was hardly for the amount that I had asked for. Still, I took this to mean that I could get it done with the amount that they gave me and wouldn’t be able to pay all my cast and crew as I had hoped.

Moreover, by the time that the money would be awarded to me through the fiscal sponsor, it would no longer be the time of year that I wanted to shoot the film. The actual incident had taken place during the summertime and it was non-negotiable to shoot it at any other time of the year because I felt that it was significant. Plus, I didn’t want to rush to get the rest of the cast and crew together. Therefore, we would have to wait ANOTHER year before we could shoot, and I still hadn’t been able to find a location.

The next year, I brought on a location scout that did such a phenomenal job that I made her a producer. Previously, she would not have been available to take on such a large responsibility—ironically, I had met her the year I decided to make the film in 2012—but now timing was right. In 2015, I had met a director who would direct my first stage play who I also made a producer, and the three of us were sort of a dream team. If I had made the short in 2012, neither of these women would have been a part of the team, and I believe the film would have suffered for it.

Anyway, my location scout-turned-producer and I stumbled upon the perfect location for the film while checking out another space. The amazing thing about that was that before 2017, the space wouldn’t have been available because people were still living in it!

What I learned from this project is that everything happens in divine timing and at the right time for it to be most beneficial to you. We will release the short, N.O.S., later this year, and the universe continues to arrange people and circumstances as we complete the project.

She has either won or placed in several contests and has had many of her screenplays chosen as official selections in the DC Chapter of Women in Film and Video’s Spotlight on Screenwriters catalog from 2014-2017 and has served as a mentor on screenwriting panels for DC Shorts and  Prince George’s Arts and Humanities Council’s Festival of Literary Arts.

Joy also wrote, produced, and directed the short film, Figment, in 2004, and was the writer and one of the producers for the short film, One Chance, which premiered at the Bowie Performing Arts Center in 2011, and wrote, directed, and produced the short film, N.O.S., which will be completed in 2018 and was a semi-finalist in the 2015 ScreenCraft Short Film Production Fund. The feature film, Love’s Duty, is currently in development with her production company, Third Person Omniscient Productions, whose mission it is to produce quality movies, plays, and television shows that enlighten audiences about the human condition and shed light on the meaning of life.

Joy also offers screenwriting coaching to those who want to write meaningful screenplays that are ready to be produced.