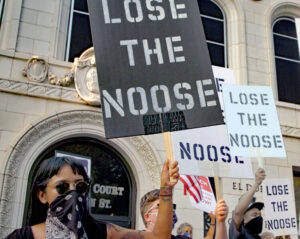 From the Heart Productions, a top-rated non-profit dedicated to helping independent filmmakers fund their projects, is pleased to announce that Director Stuart Harmon has won the second Carole Joyce Award for Excellence in Documentary Storytelling for his documentary “Hangtown”.

The Carole Joyce Award for Excellence in Documentary Storytelling is awarded to a film submitted to the Roy W. Dean Film Grant and selected as a finalist.  The filmmaker will receive $2,500 to help him continue work on this film.

“Stuart’s film is timely and powerful,” commented Carole Dean, president of From the Heart Productions. “He has done a fabulous job of weaving these stories together from a divided community.”

“Hangtown,” a documentary film in production, asks some of the most pressing questions around white supremacy in America today, revealing the challenges small towns must face when grappling with a contentious past.

For generations, the noose scrawled on the city seal and swaying effigy in Placerville, CA was a symbol of pride by locals and a kitschy tourist landmark for those headed to Lake Tahoe. Legend has it that the mostly white, former gold mining town’s moniker “Hangtown” came after three outlaws were hung during the Gold Rush for robbing a saloon in 1849 – the first “official” execution in California’s history – and the community’s ethos has been wrapped around the notion of frontier justice ever since.

Drive down main street and you’ll find scores of businesses named “Hangtown.” Hanging contests used to be a favored pastime at summer festivals and nooses adorned the school basketball gym. The area has staked its entire identity on the noose.

But that’s all changed in the wake of George Floyd’s murder. Lizzie Dubose, a 26 year-old struggling college student and one of the few Black residents of the town, has mobilized a team of activists to target the iconography in the fight for racial justice. To her the noose represents more than mining lore – it’s a symbol of white supremacy and perpetuates a false narrative about “law and order” in the American west.

The activists liken their battle to the removal of Confederate monuments across the South and have led weekly protests, the likes of which have never happened in the bucolic town. Their efforts also spark a deeper look into the problematic history of African Americans during the Gold Rush by descendants of the original pioneers.

Stuart Harmon is an award-winning director and producer. He’s produced a wide range of documentary and television projects for PBS, A&E, VICE, New York Times, Fusion, CNN, MTV, and several other networks and outlets. His short film for the NY Times titled “Guns to Gloves” is one of their top viewed documentaries, garnering over 10 million views across several platforms.

He also shot a harrowing TV documentary about the female FARC guerillas of Columbia for the Emmy-nominated VICELAND series “Woman.” His first feature documentary film THE MONEY STONE won the Roy W. Dean Film Grant.  It premiered on BBC Africa, won Best Documentary at the Black Star International Film Festival and was given glowing reviews by the BBC and The Boston Globe. Most recently he was nominated for a Deadline Club award for his work with The Intercept and received a fellowship with the Logan Nonfiction Program.

Past winners of the grant include the Emmy winning Mia: A Dancer’s Journey,  2019 Sundance Film Festival selection Raise Hell: The Life and Times of Molly Ivins, Emmy winner and Peabody Award nominee Belly of the Beast, as well as the acclaimed documentary Kusama-Infinity.

Previous winner of the Carole Joyce Award for Excellence in Documentary Storytelling was Alexandra Hildago for A Family of Stories.

From The Heart Productions is a 501(c)3 non-profit dedicated to helping filmmakers get their projects funded and made.  Besides providing funding through the grant, they offer film fiscal sponsorship to filmmakers.  This allows donations made to films they sponsor to be tax deductible.  From The Heart has helped independent filmmakers raise over $30 million through its fiscal sponsorship program.  President Carole Dean is the best-selling author of The Art of Film Funding: 2nd Edition, Alternative Financing Concepts and the new online class “How to Fund Your Film”.