After filmmaker Nick Aquilino failed for a 3rd time to win the Roy W. Dean Film Grant with his documentary, he presented From The Heart Productions President Carole Dean with a question that intrigued and touched her.

It also gave birth to a new $500 film award for independent filmmakers. 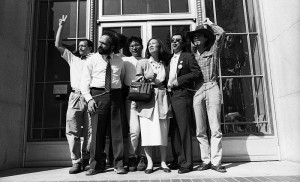 “Not With Standing” directed by Nick Aquilino

Nick’s submission was on the history of the AIDS crisis in northern California.   His work was superior.  But, due to the many other exceptional works that applied, he did not make finals list.

When this news was relayed to him, he wondered what would happen to his project and others like his that hunger for recognition.   He had been working on this very important project for years.  But, it was increasingly difficult to him to keep going without some support, both personal and financial.

He asked Carole if she could come up with perhaps a new micro-grant.  It would be for filmmakers who for years have been working on unique films that contribute to society whose projects have gone unrecognized, but should be.  Winning just one grant, one award, he told Carole, “would get the other organizations to take note” of his project and others like it.

It is what has made the Roy W. Dean Grant so essential to filmmakers.  The grant funds significant films that are in the process of being created.  Winning the grant bestows on a filmmaker proof of concept of their project and honors their talent.  This moves their films to the top of other grant consideration and funder lists.

So, the Roy W. Dean Grant Jury Award has been created.   With it comes a $500 prize.  Nick Aquilino is the inaugural recipient.

“I know it take tenacity and unrelenting faith to keep applying for grants” said Carole Dean. “Especially when you are turned down and told you did not win.  We want to honor independent filmmakers who keep going against all opposition, who have undying faith in themselves and their films.”

The Roy W. Dean Grant Jury Award will be given to an applicant of the grant who has been working on their project for 3 years or more, shows exceptional work which adheres to the grant’s mission, and who has yet to win a grant.

Another Jury Award will also be given out in this year’s Roy W. Dean Fall Grant.  Deadline for applying to the grant is September 30th.   Filmmakers can enter using the Roy W. Dean Grant online application form.   Entry into the grant enters you in to competition for the Jury Award provided requirements for the award are met.  One winner will be chosen from every subsequent grant.