It was early 1970 and a lovely Friday morning, my favorite day, because I was going to my favorite hairdresser in the valley.  Connie Stevens was a movie star in the 70’s and she owned this lovely salon with the best hairdressers in LA.   My curly hair would be straightened and then piled on top of my head in a “beehive” of cascading curls.  It was a time when straight hair was in, some women were actually ironing their hair to get the last kink out of it. 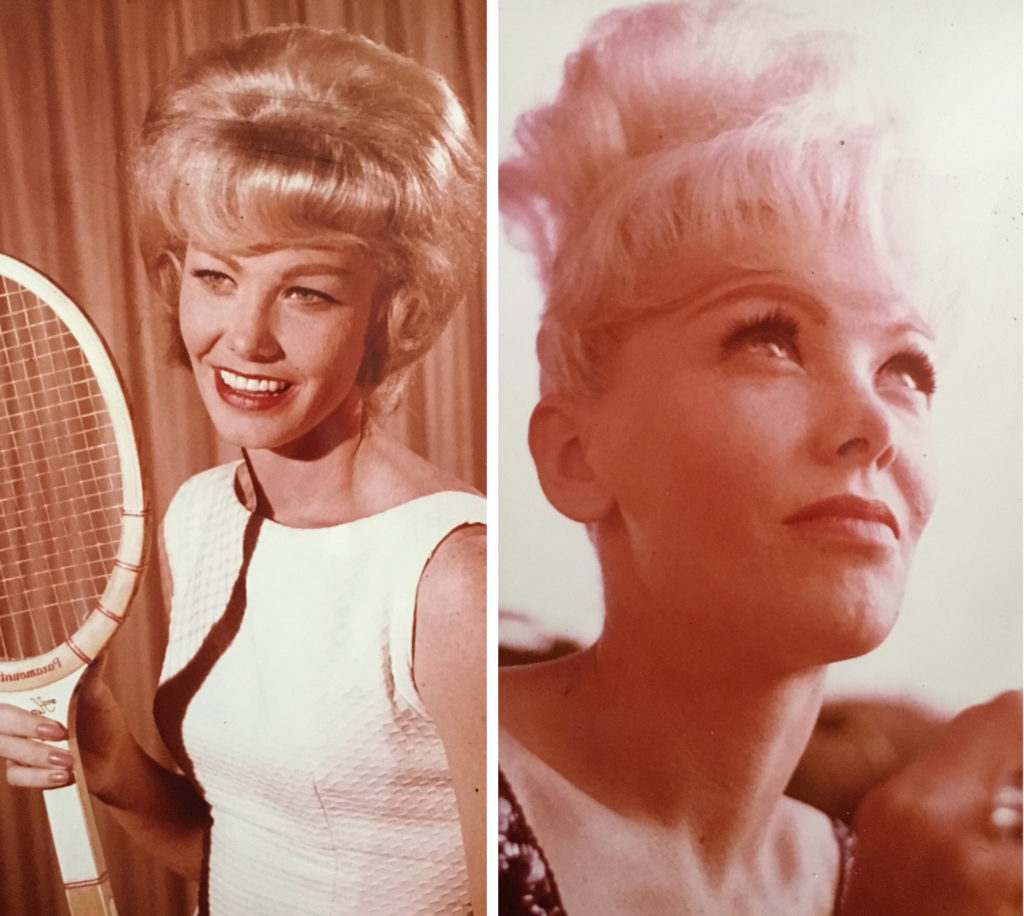 Driving home with my hair full of spray net, I was totally focused on what to wear as this was a special night.  Mike Joyce had invited me to go to the set of a top TV show.  Mike was a camera man who loaded the film on the camera and handled the distance finder.

He met me at the gate and escorted me to a captain’s chair saying Visitor…and put me near the action. David Jansen was at his height of power as the Doctor chasing the one-armed man who had killed his wife and Jansen was being charged with the murder.

Once seated the fun began.  It was lights, camera, action and then it was Reloading….and I saw Mike take this large magazine that held the unexposed raw Kodak film stock off the camera and go to the dark room.  He was soon back with what looked like the same magazine and once it was back on the camera, the Director of Photography said,” Ready” to the Director, who said, Lights, and the set lit up, camera and then action.

And in just a few minutes and they did the same thing all over again.  This happened 4 times in a row and David Jansen was all upset.  He was stomping around the set saying his lines out loud, and then the same thing would happen again.

The Invention of “Short Ends”

Once we were off the set, I asked Mike what was happening.  The set fiasco was more exciting than watching them shoot The Fugitive, that was boring.

Mike explained that David was flubbing his lines and it was a long scene.  So, when David got the lines wrong, they had to put in a new roll of film to get the entire scene at once.

Well, what do you do with those little old “Short Ends” of film I asked?  We write the footage on the can, tape up the cans them send them to the film department and get new rolls.  What?  You don’t use that film, no, said Mike.  One mistake in this business and you are history.  I can’t take a chance that the film is good.  But Mike you just loaded it yourself.

Mike said, “Not one assistant cameraman will use those, what did you call them?  Short Ends.  No, we know we can get new rolls.”

My mind was spinning, I had been looking for something that I could do, and this seemed like it was a business in the making.

Well, what if I bought that stock and sold it to these new independent filmmakers?  No, Mike said, no one in their right mind would ever buy film stock that did not come from Kodak.  Forget about it.  Waste of time.  That will never work.

He was adamant.  But I was not convinced.  You know how you feel when a light bulb goes off inside you and you know this is a good idea?  That’s just how I felt.  I knew I could create a small business buying this left-over stock and selling it to the independents.

All of the union filmmakers like Mike were horrified at the growth of the independent film business.  Those people were not in the union and the word was to never deal with them, don’t help them in any way.

The cameraman’s union was father to son.  It was only because Mike Joyce’s father was a cameraman that he was allowed to get into the local 659 union.  These independents could shoot films much cheaper and steal shots without permits.  They were brilliant at finding up-coming actors and directors to work for them for peanuts.  The proletariat said they were the dirt of the earth and had to be stamped out quickly.

How do you start a business?  I called city hall and they helped me find how to get a business license and it was very cheap to get a Doing Business As certificate.  Next,  I found I could rent a typewriter for $10.00 a month and off I went to the library to get copies of the Hollywood production companies.  I also copied the animation people., I was not sure what they did but I knew I had to include them.

So far, this was not too expensive.  It was a $20.00 investment.  Now the hard work started.  I hand typed 250 letters and send them to the companies and animators in Hollywood. I got one phone call.

Vick Shank was an animator in the valley, and he said he would take a chance on 2000 feet of 35mm raw stock.  Fantastic!  I closed him, got the agreement he would have a check ready for me, and said that in 2 days I would deliver the film.

Now, I had the sale but no raw stock.  This was I felt the easy part, to buy the stock.  It never entered my mind that I could not get the stock.  From what I heard they sold it for the silver content for pennies.

Bill Wiedmeyer was the head of Columbia Pictures Studios.  Everyone said he was a nice man, so I call and got an appointment with him.  Walked in with my new mini skirt dress, with my long legs in high, high-heels and my hair in the famous be hive.  He pulled a chair up next to his desk and had me sit there next to him.

He immediately opened his drawer and took out the scissors and said, Lean over here.  I did and he cut off the price tag of my new dress.  At first, I was embarrassed but forget that, I was on a mission, so I just let that go and hoped he would hear me out.

Bill was a delightful man, we chatted for about 20 minutes on the state of the industry at that time and discussed our favorite films.  A Man and A Woman, was the French film that everyone was discussing and he loved that I had seen it.

Finally, I asked him if he would consider selling me some short ends of film.  I told him about my new business.  He thought that was wonderful and I gave him a good price for the film because I had already sold it and I was ready for a nice negotiation.

But he didn’t negotiate.  He took me to the vault and showed the thousands of cans of film and I was in heaven!  Here was my inventory, all I had to do was sell it.

Now, the only problem was I didn’t have any money.  So, I said let me have 3,000 feet today and I will be back and buy all your film.  He started to laugh.  You want me to take a check for $90.00?  I will have so much explaining to do, they will never believe me.   Now was the time to convince him that he would be so happy when I sold all his film and he just sat back in his seat and looked at me.  I knew he was thinking so I sat very still and let him think.

Yes, I will do this for you, he said, and got up and went to the vault again and pulled some cans of the shelf, took my check and I was in business.

If I was fast enough, I could get to Vick’s office today.  So I ran home, cleaned the film cans with Comet then rubbed them down with tea towels to make the shine.  I asked Vick to get my check ready.  I delivered the film and got to the hank to deposit his check to cover my check to Columbia because I did not have $90.00 in my account!

That was a memorable day.  It was empowering.  It meant that yes, there is a market for this film. I just needed to find the people who will buy it.  Vick said to try other animators as 100 fee was a day’s work for him, so he was set for weeks.

Now, it seemed to me that to get more customers I needed to have a reference.  So, each day I created a reason to call Vick.  What I really wanted to know was if the film was good and to see how he was and if he was enjoying using the short ends.  Finally, I got up the courage to ask him if I could use him as a reference.  “I will agree on one condition,” “OK, I said, anything you want Vick!”  He replied, “just stop calling me so I can do the work!”

Now armed with a vault full of film stock, one reference, and lots of confidence all I had to do was get on the phone and learn how to sell these little old short ends.

Helping Independent Filmmakers Finally Get Their Films Made

This little ‘ol short ends business took off.  Kodak loved me because I put value to their left-over stock.  They often sent me customers.

What really happened is that many directors of photography who are now revered as some of our “greatest” started with the short ends we provided.  By providing film stock they could now afford, we helped many directors, writers and producers create their future.  It gave them a chance to make their movies.

We sold to Cassavetes and Roger Corman who started the careers of Martin Scorsese and James Cameron.  Rudy Ray Moore, “Dolemite”, was able to shoot his features with our film stock.  We took credit cards too!  Robert Townsend and other filmmakers loved this.

We ended up with three offices. Hollywood on Highland Blvd off Sunset, The Film Center Building in New York City, and one in downtown Chicago.

Never let anyone tell you that you can’t do what you know you can do!!  Just smile at critics and do it anyway.  Where there is a will, there is a way.