Dr. Joe Vitale was featured in the film “The Secret” and he’s a bestselling author of many books; so many in fact that Amazon has a Dr. Joe Vitale page!  Joe has taught people from all walks of life how to manifest miracles. 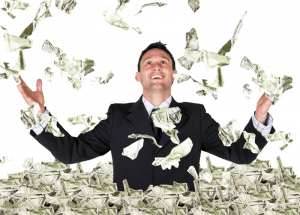 I recently interviewed him for my The Art of Film Funding Podcast on his book “The Awakened Millionaire”.  All of the indie filmmakers with whom I work are trying to raise money.  One of the biggest roadblocks for them is accepting that it’s OK to ask for and receive money.  Dr. Joe was able to offer great advice on how they can overcome that obstacle.

Forget “Money is the Root of All Evil”

I questioned him if people thought money was bad because of the misquote from the Bible saying, “Money is the root of all evil.”

Joe responded “Well that’s a good one to start with. As I explained in my book “The Awakened Millionaire”, that’s the one that subconsciously, unconsciously is active in everybody’s mind including your young filmmakers because people want money. They need money. They have to pay their bills. They have to pay all of the different services they use and the vendors they use. So why is it so difficult for them to actually get money or keep money or acquire or save money? The reason has to be in our subconscious mind. We think money’s bad.”

“Because we think money is the root of all evil, we unconsciously don’t want it. We put it away. We sabotage ourselves. We think that money will taint us, money will ruin us, money will corrupt us. Because of those unconscious beliefs around money, we find ways to make sure we don’t have it.

“I’ve often pointed out to people, have you ever noticed that you do receive money just in the nick of time to pay a bill? The rent’s due, the phone’s due, whatever it happens to be, but it comes in at the last minute and then you’re broke again.”

Appreciate and Be Grateful for Money

A lot of that mentality of thinking money is evil, Joe noted, was created from that mangled biblical quote. “The longer quote, that even we don’t know today if it’s accurate or not because this is from thousands of years ago, but the longer quote actually says it’s the love of money that is the root of all evil.”

Money is Neutral.  It is Energy

“Money in and of itself is neutral. It’s just paper. It’s just coin,” he explained.  “When we take the emotional baggage off of it or the meaning we projected onto it or that we’ve acquired over the decades from family, and culture, and religion, and government, we strip all of that away and just realize money’s a tool, then you’re free.

“You’re free to have money, use money, acquire what you need for your films, your life, or anything else.

Think of Money as a Force for Good

“Because if you really want to improve the lives of others, which a lot of filmmakers do, you can do it must faster with money, right?  In fact, I think that’s one of the best reasons to acquire money is you have causes you believe in.

“Maybe it’s your movie project but maybe there’s a movement that somebody has going on that you care about.  Well, when you have money you are a steward for that money. You can aim it, direct it, and use it where you think it will do the most good.”

Make Peace with Money to Get Money

Joe tells people “Look, you care about homelessness, you care about your project. Make peace with money because you’ll be able to bring it in and then you can use it for that project or that homeless person or whatever it happens to be.

“Again, money is a force for good. You can use it for highly idealistic spiritual reasons, but you’ve got to make peace with money.”