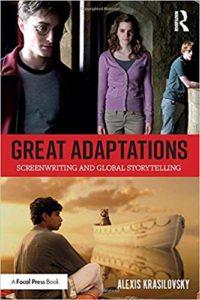 Are you thinking of making a film or documentary by adapting a book, magazine article or TV show?  You’re not alone as many academy award winning films, Emmy winning movies, and series began as adaptations.

There’s a ton of pitfalls.  Some, of course, are legal that could stop you before you start. Or, you could get tied up in lawsuits after you’ve invested time and money.  Other traps are creative.  How far should you or can you go in changing any aspect of the original?

Fortunately, on my recent The Art of Film Funding Podcast, I had an expert on adaptations to offer tips and guidance on adapting material.

Roy W. Dean Grant winning filmmaker Alexis Krasilovsky is the author of “Great Adaptations: Screenwriting and Global Storytelling“.  Educated at Smith and Yale, with an MFA from California Institute of the Arts, her book is a compendium for anyone wanting to adapt a story from almost any source.

How To Keep Adaptations From Being Stifling

“A good student will memorize the storyline and analyze the characters and some of the things they say – whether it’s a graphic novel, a short story, a play or a novel” noted Alexis.  “But a great student — or a professional screenwriter — needs to honor the spirit of the work without just regurgitating its storyline and dialogue.”

The original work needs to come alive in a new medium.  Alexis says an adaptations calls for a close relationship with the original author.  But, you don’t want to be slavishly married to the book.

“It may mean divorcing yourself from the material you’re adapting in order to discover your own voice in the process,” she explains.  “That fresh perspective can be the key towards involving your audience so that they’re excited by the story and what you do with its characters, setting, and time frame.”

How Important Is It to Stay with the Original Setting of the Story?

“Moonlight”, based on Tarell Alvin McCraney’s play “In the Moonlight Black Boys Look Blue”   was shot in Liberty City, Florida.  It’s the Miami suburb where both director  Barry Jenkins and author grew up.  But, Alexis mentions, before filmming began, there was talk about setting a in Chicago!

For some stories, like “Moonlight”, the original location is an integral part of the story and should not be altered.  Likewise, it’s hard to imagine Trainspotting taking place somewhere other than Edinburgh, “The Milk of Sorry” in any place other than Peru, or “Wuthering Heights” outside of England (although Luis Bunuel’s “Wuthering Heights”, renamed “Abismos de Pasion”, takes place in Mexico).

But many times, the creativity of changing a setting is what makes a film a winner.  One is example is Nobel Laureate Naguib Mafouz’s novel, “Midaq Alley”  The original story takes place in a run-down alleyway in poverty-stricken Cairo, Egypt.

Mexican Filmmaker Jorge Fons reset the location in his film “Midaq Alley” (El Callejon de los Milagros).  His film explores the parallel lives of characters in a run-down alleyway in Mexico City.  The film won 11 Ariel Awards in Mexico – the equivalent of our Oscars, and dozens of other international awards and nominations.

It’s a great example of a story without borders:  It’s a story that resonates with poverty issues in both Egypt and Mexico but is also universal.

Akira Kurosawa was famous for his many adaptations.  Alexis told a story contained in his cleverly named autobiography, “Something Like an Autobiography” in which talked about how  he combined different original stories to create a classic.

“As I cast about for what to film,” Kurosawa recalled, “I suddenly remembered a script based on the short story “In a Grove” by Ryunosuke Akutagawa. .. written by Hashimoto Shinobu.  It was a very well-written piece, but not long enough to make into a feature film”

Later the memory of it jumped out of one of those creases in my brain and told me to give it a chance.  At the same time, I recalled that “In a Grove” is made up of three stories.  I realized that if I added one more, the whole would be just the right length for a feature film.”

Then, I remembered the Akutagawa story “Rashomon.” Like “In a Grove,” it was set in the Heian period…The film Rashomon took shape in my mind.”

Kurosawa felt, that in order to write scripts, “you must first study the great novels and dramas of the world.  You must consider why they are great.”

“I’ve tried to do just that in while writing my book, “Great Adaptations: Screenwriting and Global Storytelling,” said Alexis  “I hope it will be helpful to others.”

There are six basic questions that negotiators can discuss and check off when working on film adaptations:

Attorneys can be very expensive and therefore doing one’s homework prior to your consultation can be a worthwhile investment. The answers are discussed in detail in “Great Adaptations,” in the second chapter.