Oxnard, CA October 21st, 2017 –   The first Roy W. Dean Grant for 2017 for independent filmmakers, awarded by the non-profit From the Heart Productions, goes to the documentary “Stranger at Home”.  Now in its 25th year, the Roy W. Dean Grant is awarded 3 times a year to films that are unique and make a contribution to society.  “Stranger at Home” will receive $3,500 in cash and $30k in film production products and services to help it complete production. 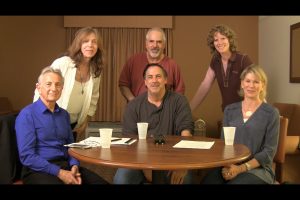 Directed by Luis Remesar and produced by Luis, Beth Dolan, and Sheila Higgins, “Stranger at Home” documents a Navy psychologist’s personal journey from decorated officer to reluctant whistle blower. His relentless mission is to hold the military accountable for continually disregarding their own solutions to the military mental health epidemic.

“Stranger at Home” has completed research, development and secondary, photography production.  The filmmaker’s goal is to finish production in time to submit to Sundance Film Festival in September of 2018.

About the Winner of First Roy W. Dean Grant for 2017

The documentary reveals that active duty military, veterans and their families are facing a mental health crisis of catastrophic proportion.  But, even in this day and age of advanced knowledge and unlimited resources, the mindset of the military is one where mental illness and the admission of psychological trauma are still considered a weakness or a defect of character.

Through the film, we see the staggering consequences of these archaic and damaging beliefs.  This includes 24 suicides to every one battlefield death since 1999, rampant homelessness, substance abuse, incarceration and broken homes. These are all symptoms of untreated war stress Injuries.   The film explores the questions of why are we failing our bravest men and women who suffer needlessly? What is being done and what more can we do about it?  Why have we let this preventable crisis happen?

As winner of the first Roy W. Dean Grant for 2017, filmmakers receive $3,500 cash given by From the Heart Productions.  The winners also receive a hard drive from G-Technology, 40% deduction on color, editing, and sound & all production services from ProMedia, 30% discount in equipment rental from AbelCine Tech, Inc. NYC, Movie Magic Budgeting software as a gift from Entertainment Partners , and much more from many heart-felt donors.

Luis, a native of Havana, Cuba, is a graduate of Columbia University where he studied psychology as well as filmmaking under both Andrew Sarris and Milos Forman. He has been honored by the Los Angeles City Council for his short film OUT OF ORDER and won an ACE Award of Merit for his bilingual,anti-smoking PSA for the American Lung Association. His feature-length documentary REGRESO – about the resiliency and inventiveness of people living through the many challenges in today’s Cuba – has screened at festivals and universities worldwide.

A graduate of Carnegie-Mellon University School of Drama, Beth has worked on popular situation comedies such as FOLEY SQUARE and VAN DYKE.  She also worked on LOS BELTRAN,  an award-winning Spanish language comedy for Sony/Telemundo. Under her own production banner Coyote Pass Productions, Beth has produced award-winning PSAs and short form documentaries. Her feature-length documentary REGRESO premiered at the Santa Barbara International Film Festival and has screened at other festivals and universities worldwide.

Sheila has worked in multiple media genres as a producer, director, editor and videographer.  This includes working on such shows as: TALK SOUP, E! TRUE HOLLYWOOD STORIES, as well as the OSCARS, EMMYS, and the GOLDEN GLOBES.  She’s also worked as an editor for Tribune/KTLA News and Special Projects where she won awards from the Greater Los Angeles Press Club as well as a TELLY. Other documentaries she has worked on inlcude: OUR STORY, KIDS GET CANCER TOO – SEEING IS BELIEVING; THE INSPIRING STORY OF RWANDA – AHE PASSION TO PLAY, ONE PLAYER’S STORY and SINGING FUNNY.

The Roy W. Dean Grant has awarded over $2,000,000 in cash and donated film services to films.   The grant has been an important lifeline for filmmakers that need help to complete their film.  Without assistance from the grant, many excellent and important films may never have been made.