In the Intentional Filmmaking Class on film funding that I teach, I usually start with marketing.  It’s something filmmakers often overlook until the film is finished.

I know from working as a fiscal sponsor how marketing your film early brings you money for donations, major discounts, and in-kind donations. 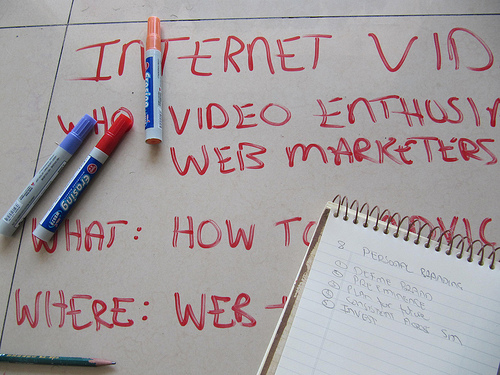 But, I believe if I was on a stage and my class was sitting in front of me, they would be throwing things at me (well, it’s an online class so maybe they are throwing things at their computer screen!). Filmmakers don’t want to hear the fact you need to market your film while you make it.

On my Art of Film Funding Podcast we interviewed Sheri Candler, a film marketing genius, who shared her brilliant, clearly outlined concepts.

Sheri explains how and why you need to identify your film’s market during the early stages of production.

Why You Need to Start Focusing on Marketing in Development

“I understand this seems like a business thing that they don’t really want to get involved in,” Sheri says referring to the block creative people put up when dealing with business matters.

“But what I normally say to them is, if you are planning on having a career beyond this project, you need to pay attention to marketing because part of show business is not just the show, it’s also the business.

Why You Need a Marketing Plan to Create a Strong Budget

Sheri asks that filmmakers need to realize that they are not just making a movie for themselves. If that were the case, it would be a hobby or something to put on shelf to look at.

If people are making it for people to see, you need to know who those people are. Who are you making your story for?

“Because you won’t be able to reach them if you don’t know who they are, and that is really the basis of what marketing plan is.

How Working on Marketing Early Will Help Film Reach its Audience

As Sheri explains, “there is just so much competition these days for the audience of the film.”  Filmmaking has gotten cheaper, the equipment has gotten cheaper and the ability to edit and even to distribute your film is cheaper too.”

“But it also means so many more people are doing it, so we have this glut of content where there is just tons of it in the world and it’s very difficult to just release a film and hope it does something for you.”

“It isn’t enough to target men or women or even an age group like 18 to 35. You need to know exactly who your story is going to appeal to and describe these people.

“There’s got to be something at the heart of and at the emotional core of your film and you need to start from there.”

Marketing Questions You Need to Ask Yourself about Your Film

Sheri provided a list of essential questions filmmakers need to ask as they embark on marketing their film.

What is it about your film that is attractive, not just genre wise, but attractive to the kind of people who like this story?

Why are you attracted to this story?

What is about you that wants to tell it?  Start really identifying those things in yourself like:

Where would I go on vacation?

What would I wear to the premier of the film if it wasn’t mine?

With these answers you can start to find those communities where you would go online and it would be much easier for you to join them because you are like them.

“It is very authentic and human rather than the advertising base model that we had for so many years which is: I make a film in secret, and then I throw it out into the world and try to advertise my way into an audience.

“Hollywood still does that, very much so, but a low budget independent film cannot do that, will not have the funds to do that, so they can’t even approach their filmmaking from that perspective.”

Carole Dean is the president and founder of From the Heart Productions and author of The Art of Film Funding, 2nd edition: Alternative Financing Concepts.  Her unique, innovative Intentional Filmmaking Class teaches filmmakers how to get their films funded.  New classes begin September.  Discount for early enrollment.