Carole Dean, author of “The Art of Film Funding”, discusses her new class “How to Fund Your Film”.  Why you need a believable budget, a killer script, and a plan to capture HNI’s.

Carole Dean’s passion and mission is teaching film funding.  She found her love and calling after creating her revolutionary first business. Beginning buying left over film from studios in the 1970’s, she sold it to filmmakers at discount helping spur an explosion in independent films. Getting to know her clients, she saw how difficult it was for them to get funding. They were artists and dreamers and not savvy in raising money from investors.  So many great films, filled with incredible life-changing stories, from talented producers and directors, were going unmade and it made her mad. 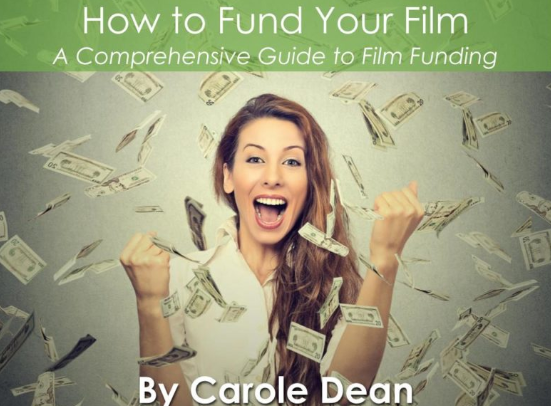 Carole Dean’s new class “How to Fund Your Film” is available now on Vimeo.  You can save $10 off the price until May 31st by using the code GetFunded.

In 1993, she founded and is president of From the Heart Productions, a non-profit dedicated to helping filmmakers find money for their films.  The organization offers film grants, film funding classes, and fiscal sponsorship for filmmakers.  Since its creation, Carole has helped guide filmmakers to raise nearly $30 million for their projects.  In 2012, she authored the best-selling “The Art of Film Funding, 2nd Edition: Alternative Financing Concepts”.

Her new video class, “How to Fund Your Film”, has just been released and is now available on Vimeo on Demand. In it, Carole has created a detailed, informative, and fun course for filmmakers that lays out a step-by-step plan for funding their film.

On The Art of Film Funding Podcast, Carole previewed her new class with host Claire Papin.

Why Did You Create the How to Fund Your Film Class?

I give a lot of consultations to filmmakers. I am lucky, I love what I do. I have the greatest job in the whole world. I get to talk to filmmakers who want advice on film funding.

And one day I hung up the phone from a consultation where the woman was very pleased with what we created together. It’s always a two-way street. It’s bouncing ideas and my sharing the knowledge.  I began to realize that I have a lot of information. You know, sometimes you get used to it, but this filmmaker was shocked at the knowledge I shared.

And I thought, I really have got to get all this down. I have so many stories to tell about people who were successful by doing unique and unusual things. So, I decided to start taking all of the notes that I give to filmmakers and putting them together so I could create a new book. It really started out to help save me time. But then I realized, that there’s a lot to learn I ended up with a three hour class!

The sad news is, it’s an average six years for someone to make a documentary plus two more for marketing and distribution. So, if you knew going into a film as a documentary that it was going to take you eight years, you might think twice.

My job is to help you make it a lot faster.  I want you to know where the pitfalls are and where to put your focus. And that’s what I put in this book. The idea would be that you get finished faster.  Then, for features, it can take from 3 to 5 years and of course that’s all about finding the money.

I spent a lot of time on finding money in the class for feature makers as well as for documentaries or shorts or webisodes. It’s all the same thing. It’s raising money for your art.

Where is the Power Point?

It is on Vimeo and from the current sales I find what people do is they will watch about 20 minutes and then they’ll come back and do another 20 minutes. It is in sections to let them do as much as they want at a time. It’s all created for filmmakers with current filmmaker’s success stories.

How to Fund Your Film Has 14 Sections?

You may remember Johnny Depp in Alice in Wonderland said, where, where do we begin? And they said, Oh, you start at the very beginning and you’re going until the very end.

So, the very beginning of the class is when you say:  I want to make a film and it goes until the end where you have lots of information on funding, marketing and selling yourself and your film.

Where will you find the time to make a film? That’s what I want you to ask yourself first.  Are you willing to put in 15 to 20 hours a week?

Because most filmmakers have a job, a usually a full time or two half time jobs and then they have their family. They have to their health. They have to take care of their health and exercise, meditate. And now you have your precious film that you want to bring into that world.

You have to make some major decisions on where to find the time. In the very beginning, we cover how to schedule your time, how to find it, what to give up. I give you suggestions, but you make the decisions.  You really want to make a commitment to creating your film.

And You Need to Make Time for All Your Rewrites

That’s the most important thing about writing. My friend Jeff, who runs The Writers Bootcamp says, when you’re finished with your script, well congratulations, but you are only 7% finished because now you have the rewrites.

I helped one man with a mystery, a thriller film, and I read 52 revisions of his script. He was very successful, he raised the money, he made his film, he won awards for it. So, it takes a total amount of focus.

You have no idea how many times you’re going to have to rewrite your script. That’s for a feature for a documentary it’s such an organic piece that you’re always rewriting it because as soon as you turn on your camera, the film takes off and it often goes in a new direction.

So, when you finish that script, get some coverage, get people, not your friends or family. Don’t send it to anyone you know.  Send it to a professional reader for coverage.

You can find them on Craig’s list. Please, get some honest feedback and you have to continue to do that until you really have a strong, incredibly good script because your whole future depends on the power of that script.

And it is the same with the documentary. I say put some passionate in your proposal. Because when we are judging films, we’re sitting here, reading one proposal after another for the grant.  When we hit one with passion, we jump out of our seats with joy and want to share with the rest of the judges. I want passion that jumps off the page.

You Give Advice on Why Filmmakers Need a Believable Budget

Oh my gosh, yes. That’s when everybody freaks out, but the whole secret is that it must be believable. You want a believable budget.

And for the grant I get a lot of budgets that are even numbers and I know they’re guesstimates and I will accept them, but I don’t know about other grantors. I think that for your own self being and the peace of mind, you really need to know what your budget is.

And You Tell Them How to Get One

So, I have put in How to Fund Your Film Class people to call people that are donors to our Roy W. Dean Grants. I recommended David Raiklen for music,  Sam Dlugach for color, Jerry Deaton for sound and more people for the New York area.

These people are exceptionally talented, and their prices are reasonable. And they love documentary filmmakers and independent filmmakers.  Especially ones that come through From the Heart Productions.

And that’s what you want, is you want someone who will love your film and take on the same passion you have for it.  And that I’ve seen that happen with all three of these people with sound, color, music and more. You always want to put a brilliant team together.

And, and I’ve explained to how to do that.  To get a believable budget, you really need to call people and say, here’s what I’m doing and what do you think this will cost?  Give me an estimate. And I know that,  as I get closer, I can get to the penny.

You want to get a believable number because you never know when you’re going to get in an office or at a luncheon with some person who says, well, really how much you need?

And you can say $56,000 is what I need on my budget and bring up the budget on your phone and say, here it is. And you can defend every line.

You’ve Also Mentioned the Importance of Networking for HNI, High Net Worth Individuals

Well, this is the next phase. You get your believable budget, your incredible script, your killer script and your brilliant outline impeccably done for your documentary or short or webisode. And you have the pitch, the proposal, the paperwork. Now what are you going to do?

And many of these organizations offer a low-priced membership that you could afford. And yes, they have some gala events, but that may be worth it at the end of the year.

But the main thing is that if you join and you really put in some time and give of yourself to that organization, let’s say that it was a for the humane society, that’s something that simple.

You might be walking dogs right alongside of someone who’s worth a couple of a billion dollars!

Carole Dean’s class “How to Fund Your Film” is now available on Vimeo on Demand.  You can save 10% if purchased by May 31st by using code GetFunded