How to use hybrid distribution and virtual screenings to be more effective at raising funds, selling your film, and generating revenue

Keith Ochwat is the founder of the Show&Tell virtual screening platform which also offers educational courses for filmmakers.  After producing his own documentaries for 12 years, he’s advised hundreds of filmmakers on their distribution fundraising strategy. 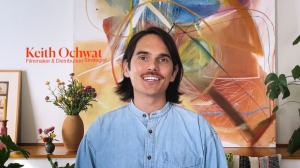 Keith recently joined me on my The Art of Film Funding Podcast.  His information is most important for documentary filmmakers who want to reach their target audience.  Here are some highlights of my interview with Keith on implementing a hybrid distribution strategy for your film.

What is a hybrid strategy?

I would define a hybrid strategy as one the most effective ways to think about getting your film into the world and to fundraise. I think distribution and fundraising are really hand in glove working together. And I think if you’re successful at this new approach to distribution, we’ll be talking about today, you’ll be more effective at raising funds, selling your film, and generating revenue.

Hybrid strategy the way Peter Broderick and I always talk about distribution. Someone who is great at theatrical release, is not going to be that good at securing you a television deal. If they’re good at television in the United States, they are probably not going to be that great at securing television deals in Finland, in Brazil, which can be most lucrative for filmmakers as it has been for me and many other filmmakers.

If you make a deal with a single distributor, then you are not taking a hybrid approach. Rather you are   placing all your faith in the belief that one company can maximize your audience and your revenue in all of these windows of distribution.

What we advocate is a hybrid approach where you split your rights.  I define a hybrid strategy, big picture, as splitting rights and retaining control. There are some organizations like the Film Collaborative that helps filmmakers make the most of festivals if they’re willing to work with you. But they’re probably not going to want to make a consumer release deal for you.

Or if you’re working with Richard Abramowitz for your theatrical, you’re probably not going to want to work with him making your international deals. We advocate splitting your rights and using organizations who are expert at certain windows so you can make the most of every window of distribution.

Tell us more about the benefits of hybrid distribution.

We made much more money, and we reached a larger audience. Fundamentally, it was more rewarding to go through that process with a hybrid strategy. We got our film broadcasted on PBS nationally. We made a streaming deal with Netflix.

With my last film, we also prioritized a new or less traditional approach to distribution and fundraising. We worked with non-profit and corporate partners that believed in the message of our film. AARP was the biggest one. They ended up putting up over $250,000 to support a, a series of live events, virtual events, and they sponsored our PBS broadcast.

You may have heard sponsors on PBS where they say this program was brought to you by, and it was AARP and a few other companies that sponsored our film.

How has the expansion of the virtual world has created a new window for documentary filmmakers?

The rise of Netflix is because there’s been a rise in this virtual streaming world, especially for documentaries. Audiences expect to be able to stream films from the comfort of their home. Less and less documentary fans, even in this golden age of documentary are going to theaters to see documentaries they’re streaming at home.

Tell us about your new company Show&Tell

I do a lot of teaching. I love to teach. If I had another life, I’d probably be a professor. And I love sharing what I know so that you don’t have to make the same mistakes I made.

We have an educational community. I coach filmmakers on their distribution and fundraising. I also have an online course which has over 50 lessons and we have a private Facebook group. We have a webinar three times a month, on Thursday at 1:00 PM. It’s a free webinar about different topics.

Example, the month of July was dedicated to fundraising and in traditional ways and I had the pleasure of doing a webinar with Carole on July 15th. You can go to our website ShowAndTell.film, click on coaching, and you’ll see our calendar of events.  There you can sign up for a free webinar and learn more about what we do.

My motivation with ShowAndTell.film is to help filmmakers avoid mistakes and help you generate revenue for your film plus help you build your audience.

If you’re at picture lock or interested in a virtual event, if you’re in distribution, you can use our services. With our services, you can ask for paid tickets or you could ask for donations or do both, which is my recommendation.

What is best way to monetize a virtual event?

We teach you how to approach partners and ask for virtual events. You can recognize your partner with a hyperlink or put their logo on your event page. You can even put a short commercial message that plays before your film. There’s a lot you can do with our platform.

You can totally customize your event.  You can set the dates, change the dates, add tickets, lower the ticket price, change donations amounts. A store is available for you. We make it easy with simple tools.

And I think that the knowledge that I’m providing is unique. What we do is really encouraging filmmakers to embrace the hybrid approach, make the deal with Netflix when you’re in your consumer release stage, get on PBS for your TV release. We’ll show you how to do this. You should also prioritize conferences, partnerships, and fuel that success through understanding with clarity, your target audience.

In our online course there are over 50 lessons in our private Facebook group, we help filmmakers understand strategies and tactics related to target audience identification, pitching partners, identifying partners, providing templates and tools for you to make money with distribution.