Everything in your room was a thought before it became a material object.   Thought creates matter.   So says Ken Elliott, author of Manifesting 1, 2, 3, and you don’t need 3  who we interviewed for our The Art of Film Funding Podcast. 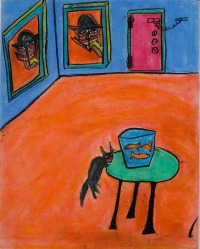 His information is fascinating.  He shares how he learned to send visions of his thoughts to his teacher.  From this, he went on to manifest a successful career as an artist as well as writing an important, well received book.

Does your film need funding?   You need to see what you want.   Ken says this is the first step in manifesting.  Then, “move it from your head to your heart.”   We communicate through our heart chakra.

Find this heart place to send your vision to the universe.   Remember how special you feel when someone says something that makes your hand touch your heart?

Tell me a great story, touch my heart, and I will open my pocketbook!

Send Your Visions With Emotions

I think you should send your visions with emotions.  I like my requests to have“urgency”.  So I send them up with joy, happiness and gratitude.  Emotions heighten manifestation.

Ken talks about children who manifest what they want.  They see it, they say it, or point to it. and they become relentless in their request.  They get what they want through:

Once you start focusing on a vision things happen.  In our Intentional Filmmaking Class, we focus on what we want by listing it and envisioning it as completed.  We list what we want and send our intentions/visions as if they have happened.

That seems to be essential.  You have to believe you have it.  You are living in it.  It is.  Once you step into the reality that “it is” you can “feel” it and “see it.”  This clear vision is a key to manifesting.

Ken mentions list making.  That’s what we do in our class.  We make a list of what we want.  Short and concise so that we can read it daily and these things become reality.

Ken says that a friend of his who is an out of body person could see his list of things start to manifest on the other side.  Then it comes into our reality.  I don’t know about this.  I just know that the “how” is not important.  I know the vision and imaging that you have it is the key to manifesting.

Did you know that Rhonda Burns and her crew manifested their top selling film The Secret? by using the concepts in The Secret? They manifested what they wanted. They saw this film opening all over the world at once.

Convert Your Worries Into Actions

Ken Elliott says that your biggest enemy is fear.  You can overcome it by converting your worries to action items.  Put them on your calendar.

I find he is right.  I keep a pen and paper and when thoughts come to me that could be a fear, I write an action note to solve the problem.  For some reason the brain stops worrying. Then the next day, if it is still a worry you focus on it or you let it go.

Ken says to create a movie for the future first create it in your mind. Close your eyes and imagine you are in your future. See the future and live it.  Be on your couch in a lovely home sitting at the end of the day and seeing your film completed.

The Power of Gratefulness

Use the heart now by sending feelings of love and gratitude while you see the completed film and discuss your success. He says you use one of the most powerful things in the universe: gratefulness.  Be grateful that you have the finished film. Charge it with gratitude and love.  See this movie once a day.

This manifesting is available to all of us. Thought is real, it can create, we know this from quantum physics. Why not believe you can improve your life, create more joy, make a film and fulfill your heart’s desire?  Even if for only 90 days, why not use your vision, lists, focus, lack of fear and most importantly faith to create your film?