When 16 year old Chris Strachwitz left Germany and came to the US in 1960, he played his radio every day because he was so impressed with the music in America.  He loved it all! 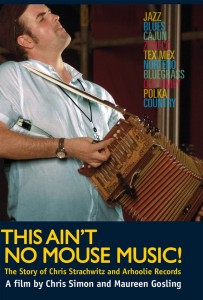 He listened to Mexican music, soul, and blues, jazz and accordion music.  Chris developed a very good “ear” for music.  He knew how to discern talented people.  But, many of the artists he liked were older musicians whose work would be lost when they went away.

He decided to dedicate his life to record them to save their music.

In the documentary “This Ain’t No Mouse Music”, we follow Chris from teenage music lover to a restless archivist who discovered and preserved the work of many great songs and artists.

He started on a shoestring.  He began to record music exactly where he found it.  In front yards, restaurants, bars, by the lake.  Wherever the musicians played, that’s where Chris recorded them.

Chris never had a studio.  He never wanted one.  He wanted to record the music just where he found it.  This brilliant idea really worked, you can hear it in the recordings.  It’s natural and the outside or surrounding sounds belong.

Chris started his own record label Arhoolie Records.   Arhoolie is the word for a field hand in the south.   He became a folk, blues and soul music detective combing Texas, Louisiana & Mississippi for musicians and also for local records.

During his search for music, he found folklorist Mac McCormick who became a brilliant partner to help Chris in his quest.  Chris & Mac were not afraid to ask anyone for the names of musicians.  Once they had a name, they used their detective skills and went to work to find them.

This desire to find folk music in the South would cause him to find some of the greats.   He found Fred McDowell, Aakka White, and Big Mama Thornton, who sang Hound Dog and I Smell a Rat.

Chris took many of these people to the folk festivals and on tour to either create or resurrect their careers.   He took Big Mama Thornton overseas where she recorded on of her best-selling record Big Momma Thornton – In Europe.

He recorded Country Joe and the Fish singing their anti-Vietnam War song I Feel Like I’m Fixing to Die Rag.  Chris recorded this in his home and when they were leaving they said, “What do we owe you for the recording?”

“Well, you don’t have a publisher,” Chris replied “So, let me be the publisher.”

They signed a contract which brought Chris a lot of money.  Chris used this income to cross the country and find us these marvelous musicians.   Years later, when they next met, Chris gave the publishing rights back to the artist.

Chris is a one-man-band by finding the talent, producing, recording, editing, marketing, selling and promoting.  He even shows you how to wash your records!

If you love music, musicians and good bio pics, this is a wonderful film for you.

Songs truly are the poetry of the people…

The podcast Dissecting Docs with Carole Dean and Don Schwartz is dedicated to our most precious and beloved filmmakers, the documentary filmmaker.  Each week, the show honors these brilliant creatives who give of their time, energy, and sometimes their freedom to bring us the truth.  They are our last vestige of sincere, unbiased reporters who put their heart into their films.