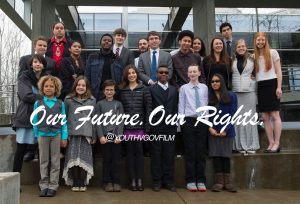 “I mean, I think for a lot of young people right now, life is really scary—because we’ve never seen a moment like this in history. And our feelings about our life and our future is all because of choices that we had no participation in. And so the plaintiffs join this case because we all know who’s to blame, and what needs to be done.”
Young Litigator

Christi Cooper’s documentary film Youth v Gov tells the story of 21 young people fighting for our environmental future. The young ones are supported by a large number of caring people including a powerful attorney, Julia Olson. Their weapons of choice are federal courts.

We follow the young people and their supporters through the agony and hope, the ups and downs as they face and traverse the federal courts system. They want to ‘force’ the federal government to effectively address the decades of massive damage perpetrated by—and still being perpetrated by—our government’s support of fossil fuels.

Post Film: The young ones and their team are still on it!

Cooper reports: “The case is not over yet! It is currently with the district court, and Judge Aiken has ordered the Department of Justice attorneys to meet with plaintiff attorneys to begin settlement discussions. In addition,18 Republican state Attorneys General have filed a motion to intervene in the case, and want a seat at the settlement table. So, the case is heating up again, and definitely on the radar of fossil fuel-supported politicians. We hope that if Judge Aiken allows the plaintiffs to amend their complaint that it will be quickly back on the track for trial again!”

Whatever the final outcome may be, in my humble opinion this team of young litigators won their case, and are still winning. They have joined the growing number of people and organizations who are doing anything and everything they can to reverse the catastrophes us wayward adults have created.

Youth v Gov is ultimately a celebration, and one of the most moving and most significant environmental documentaries I have seen. This is more than a film; it is a movement. I whole heartedly suggest you also view the film’s organization, Our Children’s Trust.

The film’s original score is by John Jennings Boyd.