Produced and directed by Michael Beach Nichols and Christopher K. Walker, “Welcome to Leith” tells the story of the attempt by a small group of white supremacists to take over a very, very small town in North Dakota. Although racism is the topic of this film, and although the players include organizations and governmental institutions, the focus is on the characters. 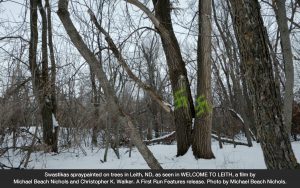 Located in Grant County, Leith has a total of 24 residents. As of the film’s production, the county has one sheriff and three deputies.

In 2012, career supremacist and publicity hound Craig Cobb moved to Leith. In concert with his amigos he purchased twelve plots of land. The goal was to create an all-white supremacist community. The effect was conflict with the threatened residents.

My immediate question was—and still is—why didn’t he and his simply purchase uninhabited land and much more smoothly and successfully create their dream community? Cobb’s need to feed his publicity addiction?

In true journalistic spirit Walker and Nichols give full voice to both sides of this conflict. They cover the inevitable moves and counter-moves by each side as the probability of violence escalates.

While our mainstream media provides more coverage of societal and institutional racism in the United States, small but highly venomous white supremacist organizations and lone wolves are still very much with us. This film is a haunting and incendiary reminder.

“Welcome to Leith” features standard-bearing production quality and a sound track which perfectly mirrors the air of this place and its story. The film was released theatrically in September, 2015, by First Run Features.