His Way opens with a series of quick cuts of famous people sharing observations of legendary Hollywood producer Jerry Weintraub. They sketch a portrait of a man equally noble and ignoble – depending on your perspective and, especially, on which of his two lists you’re on. 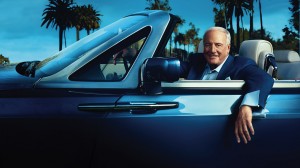 Douglas McGrath directs this affectionate look at Weintraub who – with his Jewish background and East Coast dialect – seems to have come right from Central Casting. “Not just as a producer,” George Clooney says, “as a guy, he’s one of the last of his kind.”

It seems like actors of all genders who work with Weintraub, develop the ability to do accurate impressions of the man – as you will hear from Clooney, Damon, and Ellen Barkin. Clooney and Damon tell of the unwritten rule on the set of Ocean’s Eleven that required the A-list cast to provide one practical joke a day on Mr. Weintraub. He took it like a man, they relate.

Utilizing interviews with Weintraub’s brothers and offspring, actors, showbiz professionals, his significant others, as well as the man himself, we learn the story of his life, his massive accomplishments as well as his losses. Weintraub seems to be the embodiment of the phrase ‘indomitable spirit,’ and that’s what we’re left with as the credits roll.

Understanding that Weintraub is a powerful Hollywood guy I imagine he would not approve of, let alone have the vast majority of screen time in a documentary about his life without ‘final cut’. So, my psychologist’s mind is also left wondering ‘what else makes Jerry run?’

In any case, one doesn’t sustain this level of success in Hollywood, have so many A-list actors appear in one’s life story, and project so much authentic happiness without the charm, guts, charisma, business sense, and joie de vivre of Jerry Weintraub.