A couple guys are loading a large white van with a large amount of large cases full of large musical instruments. One of the two men has a large crop of black wavy hair. 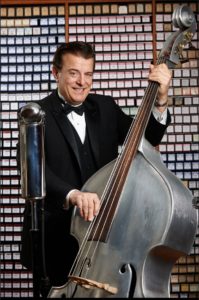 Cut to a large dinner/dance club in a big city. A band is playing. Eleven players all in black tuxedos, performing a very fast tempo old-fashioned song. Sounds like the 1920s or 30s. Sounds like the music from most of Woody Allen’s movies. Sounds like some music I heard on Garrison Keillor’s ‘A Prairie Home Companion’ radio show. Sounds like Dixieland. Sounds like The Little Rascals.

The man with the large crop of black wavy hair is at the back, playing a metal stand-up bass guitar—at lightning speed. He’s singing just as fast. The song ends, he makes an announcement to the audience. He’s the band leader. The arranger. The promoter. The organizer. The businessman. And, of course, one of the roadies.

Thus is introduced Vince Giordano, the definitive exemplar of someone who is a legend in their own time. And thus begins Dave Davidson’s and Amber Edwards’s Vince Giordano: There’s a Future in the Past, the definitive documentary about this amazing musician. The film proceeds to tell a thoroughly engaging story about a jaw-dropping talent whose Goddess is Music, and whose instrument is a ‘society band’ featuring players who have been with Giordano for decades.

Giordano has never made it big. But, he’s always made it. He lives in a modest home which is a virtual museum of old-time music. His well-lit basement is stuffed with dozens of file drawers each of which is stuffed with sheet music. He is curating tens of thousands of arrangements each of which holds many sheets of music broken down by instrument.

Music is a language particularly suited to the expression of the broadest possible spectrum of emotions. Giordano’s music expresses pure joy.