Directed by Suzan Beraza, and released by First Run Features, Uranium Drive-In tells the now classic story of people versus polluting industry—in this instance, the uranium mining and processing industry. 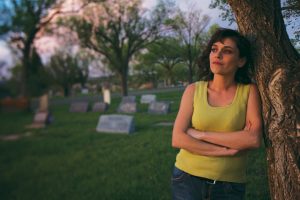 Beraza does a textbook job of covering the human side of the conflict in a small Colorado town whose people believe that their only escape from the years-long economic disaster they are facing is the chronically imminent return of this industry. She gives equal voice to those in favor of the mine’s and mill’s rebirth and those against.

The conflict is clichéd: ‘We need the jobs’ versus ‘Our environment and our health will be damaged.’ But the quietly stated—at least for the camera—passions are not clichéd.

Both sides arguments are compelling—though it seems easier to argue for the industry’s return if you have not been affected by health consequences associated with radiation exposure and other secondary results of mining—and, it’s easier to argue against the industry if you have a righteous, noble motivation to save our ecosphere and benefit all species, including ours.

I found myself with an impulse to pursue an experiment: Put the respective leaders in a room with a clear mandate: Each side must sincerely help the other side address their concerns.

How can we help your community’s economic woes?

How can we help you clean up our environment and prevent further pollution?

For those who wish to pursue the issues presented in this film, its website offers a substantial amount of resources and references.