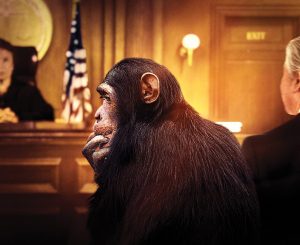 Directed by Chris Hegedus and D.A. Pennebaker, distributed by First Run Features, Unlocking the Cage documents the pioneering work of attorney Steven Wise to establish personhood rights for nonhuman animals. As of the film’s production, Wise’s overarching strategy is to establish rights for chimpanzees, whales, and dolphins. I hope gorillas are next on the list. The film includes an utterly jaw-dropping clip of legendary gorilla Koko watching and responding to her favorite movie.

The film covers Wise’s team seeking the most appropriate nonhuman animals to represent in court, the struggles of that search, as well as courtroom litigation. Wise emerges as a sweet warrior smart enough to surround himself with even smarter women.

Wise works under the aegis of the Nonhuman Rights Project whose mission is “to change the legal status of appropriate nonhuman animals from mere ‘things,’ which lack the capacity to possess any legal right, to ‘persons,’ who possess such fundamental rights as bodily integrity and bodily liberty.”

At the conclusion of the film Wise characterizes his team’s progress as ‘the end of the beginning.’ Given the depth and breadth of our assumptions about who nonhuman animals are and are not, this is obviously a monumental initiative—one necessary, but not sufficient to solve our environmental crises.

The film’s theatrical opening is at the Film Forum in New York, on May 25. See the film’s website for more screenings across the nation. HBO will cablecast the film beginning in July.