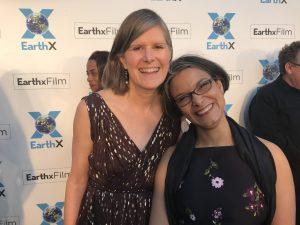 “We’ve been living so long under the tyranny of the fossil fuel industry, that it’s come to seem normal to us. The abuse that it gives us seems normal because we’ve never experienced life without it.” Sandra Steingraber

Unfractured refers to an area, state, or nation that has decided to disallow the massively damaging process called ‘fracking.’ It is also the title of Chanda Chevannes’ documentary film about the soft-spoken ecologist and author Sandra Steingraber who successfully led an initiative to permanently ban fracking from the State of New York.

The story takes place the year before that political decision was made. Steingraber has a husband, two children, and two dogs. Her husband has had a series of strokes, her two children need parental attention, and, of course, there’s the two dogs. There is no right or wrong in a decision between family and protecting our environment via a state-based initiative, but for Steingraber, either decision is accompanied by pain.

Decision made, Chevannes follows our hero through a year of personal crisis and non-stop political action—including incarceration and pepper spray.

Steingraber’s journey is both harrowing and triumphant. Unfractured is that rare environmental film that testifies to the power of an individual to make an immeasurably positive contribution to our world.