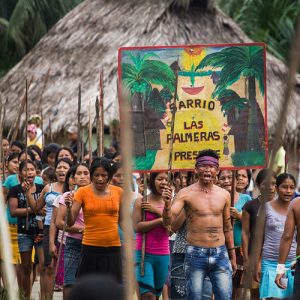 It is so easy to become inured to the travails of our world—necessary, some might say, in order to maintain one’s sanity.

Our planet’s human population is rapidly approaching 9 billion. Hundreds of millions—if not more—already live in abject poverty. Economic, political, and social injustice reign supreme around the Earth. War and strife are endemic—as is the ongoing destruction of our ecosphere.

With global media and news outlets controlled by large corporations we—those who can make a difference—are protected from these harsh realities, at least for the time being.

Countless documentary filmmakers are our Obi-Wan, our only hope—for those who intend to be informed, those who choose to ingest the Matrix’s Red Pill.

The expertly produced When Two Worlds Collide is another journey to South America, to the Amazon Rainforest, to the lungs of our planet, to Lima, Peru where critical decisions are made.

The filmmaking team of Heidi Brandenburg, Mathew Orzel, and Taira Akbar cover a confrontation between indigenous peoples of Peru—whose land has already been defiled by oil extraction—and the nation’s decision makers fighting for seemingly unlimited resource extraction. It is business as usual in South America, and around the world.

This confrontation could have, should have been covered by our mainstream media both because it is intrinsically important news, and because it is emblematic of environmental strife and conflicts throughout the world. 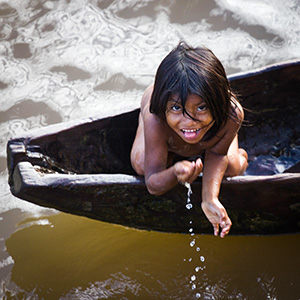 This is your opportunity to learn and see this story—another noble attempt to preserve both environmental health as well as the dignity of indigenous peoples.

When Two Worlds Collide is a First Run Features release.

If you’ve taken the Red Pill, you can take more action via the film’s website. Click on Take Action at the top of the homepage.