We learn about the founding and work of the Albany Park Theater Company in Chicago. Working with adolescents, David Feiner and 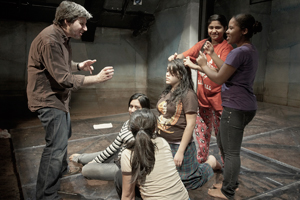 Maggie Popadiak produce plays based on the teens’ experiences. Each young person in the theater troupe has a life story; this group of teens share these stories; and then, working with Popadiak and Feiner, choose a story to produce.

We learn about Marlin—pronounced like the name, ‘Marlene’—who tells a harrowing story of rape and sexual abuse in her homeland, Honduras, and in her new home in Chicago.

We’re with Marlin and a group of 22 teens as she shares her story. Following that, we see the creative process with its joy and pain as the acting/writing troupe finds their way to tell Marlin’s story entitled “Remember Me Like This”.

The title derives from Marlin’s preamble to the group when she first tells her story.

Recognizing she is about to share horrors that happened to her—and the painful, destructive ways she dealt with these horrors—Marlin wants the group to know that the person she is now is not the person she is describing. She wants to make sure the group views her as she is: healthy.

Kelly and Yamamoto also provide shots from the produced play—shots that have greater meaning for us since we shared the birth pangs of their origins. The filmmakers also cover the very successful production’s impact on the group—especially, of course, on Marlin. I’ll state the obvious, unless you have a heart of glass, you will need handkerchiefs.

I was so inspired by Trust, and by the work of David Feiner and Maggie Popadiak that I emailed my theater friends sharing my opinion that the Albany Park Theater Company’s model could be and should be re-created in communities around the world. Pass it on!