Us humans have been messing with the Earth since we began cultivating the land. 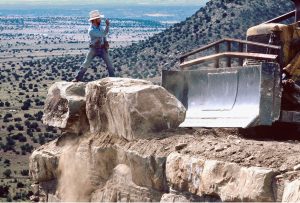 James Crump’s Troublemakers: The Story of Land Art covers and uncovers a no-longer-obscure footnote of art history about a small group of artists who messed with the land for art’s sake.

In the sixties and early seventies this group ventured from New York to the American southwest to create land art—also called earth art. They were looking for much larger canvases. The land was both their subjects and their medium.

In a little more than an hour Crump covers the major players and the interested parties who supported, observed, and commented on their work. Most of the artists have passed on to even larger canvases.

But, the medium and the story continue. See, for instance Star Axis by Charles Ross. And take a gander at First Run Feature’s Levitated Mass about a project by one of the original Troublemakers, Michael Heizer.

Troublemakers: The Story of Land Art is a First Run Features release.