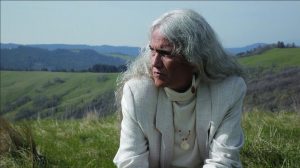 Yours truly brings a bias to the understanding and reviewing of Anne Makepeace’s Tribal Justice. That bias is one of being a champion of ‘restorative justice’—a compassionate approach to justice, one not based on revenge and punishment. There are elements of restorative justice in the stories Makepeace tells in her moving film of lives renewed.

The setting is California, two Native American tribes—the Yurok in the north, and the Quechan in the south. Our heroes are Claudette White, the Quechan judge, and Abby Abinanti, the Yurok judge. We see both judges at work supporting people who are struggling with themselves and their world, helping them avoid our nation’s conventional system of justice with its violence, high recidivism rates, and injustice.

California tribes have the option of coordinating their judicial proceedings with the State’s. You can learn more about the genesis of this tribal/state cooperation here.

Makepeace follows several Native Americans through the tribal judicial process which includes crucial elements of societal support to these individuals. The impact is simple and clear, this judicial system promotes dramatically positive outcomes. Tribal society wins, as does the greater society.

There are no adjectives strong enough to encompass our nation’s treatment of Native Americans. One small but meaningful gesture we all can make is to inform ourselves of this treatment and its horrific impact by simply viewing documentary films on the subject. Tribal Justice is that rare documentary film which highlights an enlightened approach to justice for Native Americans, one which I hope will spread throughout the United States.