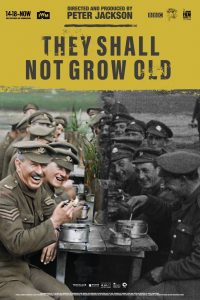 “You would be surprised that no matter what country you’re from, it’s more likely than not some member of your family was involved in this war. … The thing that I hope the film does is it encourages people to actually ask questions, do a little bit of research… you can find out a lot about the history of your own family. And now’s the time to do it because if you have parents or grandparents who are alive, it’s probably their parents that were fighting in the war. But in twenty years or so, that generation’s gone, that link will be forever lost.

“That’s all I wanted to achieve with this film, really, is to have people inquire into their own family’s involvement. In the end of the day, the strategy detectives, that stuff belongs in the history books, and the academic books. But, the film, and the humanity of it involves all of us in how our own family was shaped by this war.”
Peter Jackson

In addition to directing the mega-films, Lord of the Rings and The Hobbit trilogies which have given Peter Jackson legendary status, he is a World War I aficionado. The master filmmaker took 100 hours of WW I archival footage sourced from Britain’s Imperial War Museum, together with his 600 interview hours of WW I soldiers to tell a story of this war. The focus is on the United Kingdom’s four years of participation on the western front fighting Germans.

Jackson brings his perfectionist predilections to this harrowing yet engaging documentary. He worked with the finest craft persons available to bring the most accuracy possible to the film’s visual authenticity. As the story unfolds we listen to WW I veterans telling their stories.

The story arc is as simple as it is heartbreaking: The excitement of naïve—an understatement—young men marching through training, into battle, and then abandoned by post-war British society

Naturally, the film does not spare viewers from the carnage of battle.