“If you’re working on giraffes, she’s the pioneer, and wrote the textbook. Anne was the first person to go to Africa to study the behavior of a wild animal.”
John Doherty, Queens University Belfast, Reticulated Giraffe Project

At the age of three Dagg was inspired when, on her first visit to Chicago’s Brookfield Zoo, she viewed her first giraffe. The toddler had already expressed much interest in this strange, beautiful, elegant beast before that portentous visit. 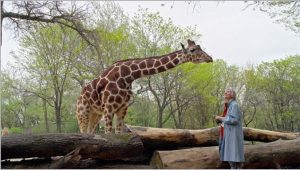 In August of 1956, at the age of 23, Dagg made a solo journey to study giraffes in Africa.

Our giraffe champion married, had three children, wrote a cornucopia of articles appearing in the most prestigious journals, secured her doctorate—only to become a victim of rampant gender bias.

A professorship was Dagg’s logical next step, it would have given her the ability to continue her research in Africa. The old boys club said ‘no.’ She became an instant feminist.

In 2010, a group of giraffologists brought Dagg into their fold, and celebrated her seminal work. More than 50 years after Dagg’s first journey to Africa, at the age of 85, the world’s first giraffologist journeyed back to Africa.

In The Woman Who Loves Giraffes director Alison Reid tells Dagg’s life story, and continues the much needed, much deserved celebration of her work with and for giraffes. Of course, the cinematography is sensational.

The film is distributed by Kino Lorber.