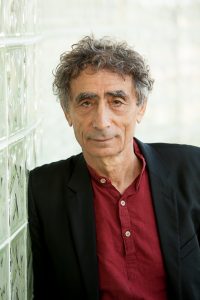 From Science and Nonduality: ‘Trauma is the invisible force that shapes our lives. It shapes the way we live, the way we love, and the way we make sense of our world. It is the root of our deepest wounds. Dr. Gabor Maté gives us a new vision: a trauma-informed society in which parents, teachers, physicians, policy makers and legal personnel are not concerned with fixing behaviors, making diagnoses, suppressing symptoms, and judging, but seek instead to understand the sources from which troubling behaviors and diseases spring in the wounded human soul.’

Directed and produced by Maurizio Benazzo and Zaya Benazzo, The Wisdom of Trauma does exactly what the title promises—revealing the crucial role trauma plays in human illness and wellness. The film is actually two films: A cinematic essay about the work of Dr. Gabor Maté, and an exploration of the impact trauma has on human lives.

In the body of the film we hear and learn from Maté throughout the film and from a plethora of students of trauma and the work they do in helping people heal from it. We also hear directly from those who have suffered from and healed from their childhood traumas. Maté and additional interviewees share their experiences and thoughts about trauma. We also hear from several people who have been trapped and suffered greatly, in one form or another, by virtue of their early childhood experiences. And we also see Maté working with victims of trauma.

This film covers a lot territory. I was struck with all of the information, of course, but there was one scene that most moved me:

We are at a very large prison yard. It is daytime, just a few clouds in the sky. A giant circle of prisoners are standing or sitting along the outer edge of the yard. A woman with a loud speaker is standing alone in the center. The woman addresses the men saying, “During your first 18 years of life, if a parent or other adult in the household often or very often would swear at you, insult you, put you down, or humiliate you—step inside the circle.”

If The Wisdom of Trauma was received and recognized as it deserves, the above list of social maladies would be significantly diminished.

A Science and Nonduality production, The Wisdom of Trauma is one of the most important documentary film I have witnessed. In addition to deserving a wide audience, this film should also be found in the political and medical worlds’ halls of power.

(Photo of Dr. Gabor Maté courtesy of self)