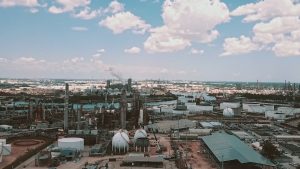 “Plastics are treated as a product that miraculously appears from nowhere and it goes to nowhere. That invisibility, that magic nature of plastics is something that the oil and gas industry has perpetuated and promoted very effectively for decades. But what was once invisible is becoming visible. The plastic crisis doesn’t start when the plastics enter the ocean, it starts when the oil and the gas leave the wellhead, and it keeps on being a problem at every step along the way.”
Carroll Muffett, Center for International Environmental Law

Deia Schlosberg’s The Story of Plastic is the latest documentary film about plastic, and it is the most urgent and powerful of the films I have viewed. With high quality production standards, Schlosberg takes us way back to the origin of plastic—both historically, and especially to the origin of the manufacturing methods of plastics. That production process begins with fossil fuel extraction and processing.

To make matters worse, turns out that the fossil fuel industry has not hesitated in addressing their loss of business from improved efficiency of transportation vehicles—including, of course, all electric powered cars and SUVs. Consequently, there is a boon in the extraction industry driven by the simple fact that plastics come from hydrocarbons which come from the earth.

While the public dialog about plastics continues, and there are small victories in reducing plastics pollution, yet, the fossil fuel industry builds and operates more and more extraction plants around the world, creating an exacerbation of the continuing deluge of plastics production.

But wait, there’s more! There is this clever idea to address the scourge of plastic pollution via incineration which, of course, takes the solid pollution, transforms it to smoke and gas, and blows the smoke and gas with its toxic chemicals—and, of course, carbon—into our atmosphere. That’s going on right now. You need to see this documentary.

Schlosberg takes her viewers around the world, reminds us visually of the horrors of plastic pollution, and interviews or features dozens of activists fighting on behalf of our environment and ourselves—as well as those trumpeting the virtues of plastic.

Schlosberg’s film is thoroughly engaging, and elicits personal reflections regarding our contribution to the problem, as well as our participation in the solutions. I encourage readers to access the website’s Take Action page.

“So many parts of our economies, so many places in the world are dependent on this relatively small group of corporations who are making a tremendous amount of money poisoning the rest of us. And so figuring out how to break out of that cycle, that’s the project of our lifetime. ”
Zoë Carpenter, journalist