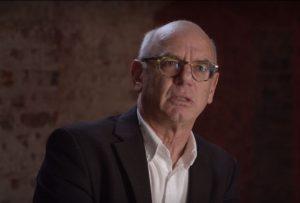 “The truth, it’s in the eye of the beholder.” Dr. Ahron Bregman

It is the 1970s. Amongst other activities, Egyptian businessman Ashraf Marwan is a spy. He has approached Mossad, Israel’s intelligence agency, and provides Egyptian intelligence. Marwan is a double agent.

It appears that Tom Meadmore’s The Spy Who Fell to Earth is a story about a spy who died—literally by falling to earth from the back deck of his London flat. The official investigation of Marwan’s death concluded that its cause is ‘Unknown.’ The fall is the inciting incident to writer/journalist/historian Ahron Bregman’s story of his relationship with Ashraf Marwan. Bregman outed Marwan as a spy, and claimed that his true allegiance was to Egypt, not Israel.

Although the question of who was Marwan’s real handlers is the spine of the film, the heart of the film is Bregman’s relationship with this unfortunately celebrated spy. Bregman tells his story over the course of the film, revealing his changing motivations in the progress of their relationship which eventually became a friendship. Bregman suffers greatly with the thought his actions may have been the cause of his friend’s death.

The Spy Who Fell to Earth is a thoroughly engaging, expertly produced documentary film. It is currently available via Netflix. Worldwide distribution is by Kew Media Group.