Directed, shot, and edited by William Sorensen, co-produced by sound recordist Stella Kwiecinski, and co-produced by Nancy Econome, The Russian River: All Rivers – the Value of an American Watershed uses the story of California’s most iconic river to tell the story, as the title indicates, of all rivers. With more than two hours running time, like the river, the film covers a lot of territory. 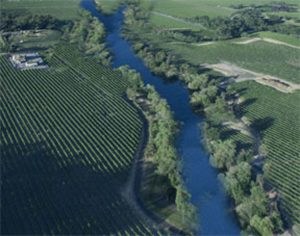 We learn of the river’s recorded history beginning with 6,000 years of ecologically-balanced Native American presence. With the arrival of Russian and European settlers we are taken on a chronological tour of the gradual degradation of the river by population growth, resource extraction, development, and mistreatment.

Sorensen interviews authorities, activists, and others who speak of what’s happened to the river, to all the rivers in California, in the American west, in the world. Some speak of our use and misuse of water – including the privatization of this essential resource. As the interviewees speak, as we become privy to information we suspected but didn’t want to face, we are treated to breath-taking exquisite cinematography of rivers and surrounding areas.

We also learn about initiatives to improve the health of our rivers. Europe, in particular, has taken great strides in helping their rivers recover. Their efforts serve as a model for any and all who wish to make a positive difference.

I was deeply touched by this film. So much so that I practically ran to my telephone, took a chance, and called the filmmakers. They answered. After thanking them for the film I asked what prompted them to make this movie. Sorensen responded:

“It really began with a single moment. We were doing a commercial project that included the Russian River as part of the subject matter for the film which was for the wine industry. One day I find myself up to my chest in the river. At that time there were occasional releases of partially treated waste water into the river – increasing the temperature of the water, and it didn’t have the best odor. This was after one of those releases.

“Here I was in the river with my camera, on a tripod, shooting canoes as they were paddling by, and I knew there was something wrong. So we started asking questions. One thing led to another. We started finding out the trouble that the watershed was in. We went through the same process that the film takes people through. It really is one unsettling story after the next. When you look at the history of the river it’s a series of insults over time. We haven’t treated it very well, and again we don’t know anything about it. So our running into the river that way, by literally being in it, was what people really need to do. They need to get closer these resources.”

“The Russian River: All Rivers – the Value of an American Watershed” will be screened at The 38th Annual Wildlife Film Festival in Missoula, Montana, this April.