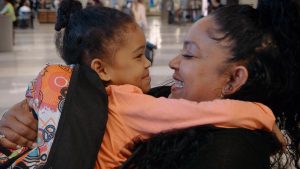 “For the first time in my life I can say I enjoy a job.”
Cara Participant

Directed by Greg Jacobs and Jon Siskel, The Road Up is a masterfully produced documentary about a Chicago-based program called ‘Cara’ which supports people who aspire to recreate their shattered lives in a healthy and fruitful manner. Cara’s centerpiece is a month-long ‘boot camp’ called Transformations held in a meeting room. The film profiles four attendees in a Transformations program.

The program’s conductor—and, in my opinion, hero—is Jesse Teverbaugh, a brilliant leader who experienced his own fall into hopelessness, fought his way out, and has changed the lives of a countless number of adults. Teverbaugh’s leadership is as confronting as it is compassionate. I noted with admiration the acceptance of crying in these meetings—including Teverbaugh himself.

On the surface it may seem Transformations to be a jobs program, but Transformations addresses much more. The following information comes directly from the film’s website:
“[Cara’s approach] essentially flips the script on the traditional formula, making the case that the first step on the road up isn’t finding employment, it’s finding hope, connection, and community. What some dismiss as ‘soft skills,’ Cara calls ‘harder skills’—conflict resolution, impulse control, even the ability to express love and accept it in return. To Cara, these are the essential skills that give their students the resilience they need to persist, and ultimately to thrive. By explicitly and emphatically stressing the ‘love’ in ‘tough love,’ Cara’s model pointedly critiques how we approach the entire issue of job training in America, essentially asking the question, “what if we’ve had it wrong all along?”

The Road Up is a hopeful film about people finding new paths to living constructive, productive, and loving lives.

The film is currently on the festival circuit. You can stay in touch with the film’s website, Facebook page, or Instagram page for updates on the film’s progress. Anyone interested in hosting a virtual or in-person community/organizational screening may contact the filmmakers at: info@siskeljacobs.com The film’s wide release will be in the first half of 2022.

(Photo courtesy of ‘The Road Up’)