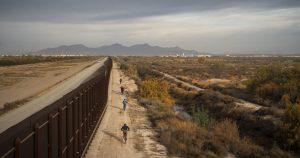 “I’ve been river-guiding here on the Rio Grande for the past six years. I want people to know what’s out here. I want the love to be shared. This is wilderness as wild as it gets.” Austin Alvarado

Ben Masters’ The River and the Wall is a simple, elegant, well-produced film about the insane wall the United States’ government is building along the Mexican/US border—and a powerful appeal to find much less destructive and much more productive ways to approach that borderline and its iconic river.

On bicycle, horseback, canoe and foot, Masters, Jay Kleberg, Filipe Deandrade, Heather Mackey, and Austin Alvarado trek the Rio Grande. They are taking in the wonders of the watershed, the mountains, the canyons, the wildlife—and bemoaning the destruction being wrought.

Although the idea seems simple—a twelve hundred mile odyssey along the border, from El Paso to the Gulf Mexico—I grimaced throughout the film as the five faced countless dangers on the land, and in the river. By film’s end I breathed a sigh of relief that there were no life-changing injuries to humans and equines. 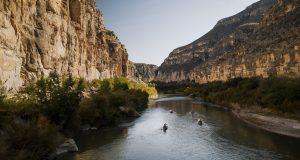 Master’s and company have made a compelling statement about the river and the wall—and provided gorgeous vistas along the way.

The next step is for people to see this movie. The film’s theatrical release is on May 3—with a one-night showing on May 2 at hundreds of theaters.