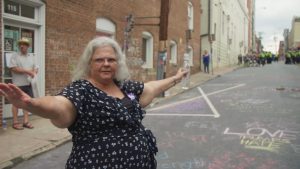 “The greatest good we can do our country is to heal its party divisions and make them one people.” Thomas Jefferson

Ben Rekhi’s The Reunited States is a very well-produced powerful film covering the political and racial divides that are damaging the very fabric of the United States. The documentary is inspired by Mark Gerzon’s The Reunited States of America: How to Bridge the Partisan Divide. Gerzon is also one of the film’s interviewees.

The film is a revelation to yours truly. It opens doors on a world of people and organizations who are dedicated to mending our divide. I had no knowledge that there was such a movement.

David Leaverton was a Republican strategist living an upper-middle class lifestyle in Texas, with his wife Erin and their three beautiful children. Responding to the nation’s polarized politics and culture, David and Erin pulled up roots, bought an RV, and travelled through all fifty states, talking to people, getting to know about their lives and concerns. The family ended up putting down roots in Charlottesville, Virginia. Along the way Erin founded an organization called Undivided Nation.

Susan Bro’s daughter Heather D. Heyer, a young woman with a big heart and a passion for equality for all individuals regardless of race, ethnicity, religion, gender identity or preference, lost her life August 12, 2017 when a car plowed into a crowd of counter-demonstrators who were protesting a rally of neo-Nazis, Ku Klux Klan members and other white nationalists. Susan founded the Heather Heyer Foundation to address the national culture of division.

Steven Olikara was concerned about the lack of younger people in the halls of power at all levels of government. He created a caucus of young members of Congress, and The Millennial Action Project to spur bipartisan legislation.

We also follow Greg Orman in his campaign for Governorship of Kansas as an Independent. He expresses a great passion for breaking the binds of the two party system. Orman is a Board member of Unite America.

At film’s conclusion we are treated with a montage of images of even more people all of whom are working passionately to end our divide with their own actions and organizations.

The Reunited States is an emotionally powerful film that challenges Americans to directly confront our broken status quo in the spirit of making a more perfect Union.

I was so struck by Ben Rekhi’s documentary that I wanted to learn what brought him to the challenging subject of this film.

What inspired you to film the documentary in the first place?

Honestly, it was after the 2016 election that I wanted to move into non-fiction. It was a way to not only process the new reality that we were in, but I saw it as a means to give others hope in a turbulent time.

‘The Reunited States’ was inspired by a talk I saw Susan Bro give in DC, where she talked about the need for difficult conversations to move past our divisions. Susan is the mother of Heather Heyer who was killed during the Unite the Right rally in Charlottesville. I was struck that if she who had suffered such a unimaginable tragedy could talk about reconciliation, then what were the rest of us doing? It was a huge wake-up call, so I approached her after the speech and asked her if I could follow her story.

Looking back, it was crazy to think that we could actually make a film about the most pressing issue of our time – our political divisions – and challenge the fundamental assumptions about where they come from. Thank God I didn’t know how hard it would be because I might never have started!

Why do you think it’s relevant / important right now?

The core idea of the film is that polarization is not only an external problem – it’s an internal one as well that we are all responsible for. It’s been a turbulent several years, exciting for some and terrifying for others, but whether we’re on the left or the right, we all play a role in the divisions in this country. The film is about transformation and self-reflection, looking in the mirror and asking ourselves am I part of the problem? Or part of the solution? Honestly, it’s not something that is easy to articulate because we are all so passionate and partisan these days. But if it’s us vs. them, right vs. wrong, good vs evil, we will all lose in the long run. Life is not black and white. My biggest hope with the film is that it challenges us to look at ourselves and the world around us through a new lens. There’s a lot we need to discuss, but we can’t even begin to talk until we learn to listen again.

What do you hope to achieve?

I hope that The Reunited States does play broad and wide, as there’s something for everyone. I think it speaks to our times like nothing else I’ve done before. With all this division, all this despair, all this anxiety that we are all going through, my greatest desire is that the film can give people some hope when it is so badly needed. That it can inspire people and remind us that things will get better, and that we all have a role to play in building a healthier democracy. Because right now, we need all the hope we can get.