“I don’t know of any playwright more intuitive, more reliant on taking stuff from the unconscious, and letting that create form.” Edward Albee 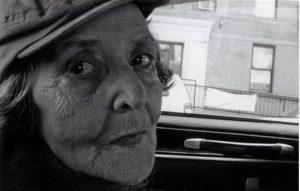 The Rest I Make Up has three characters.

2. Michelle Memran is the journalist and filmmaker who first met and interviewed Fornes in 1999, and produced and directed this portrait of Fornes. Beginning in 2003, Memran spent time filming with Fornes in New York, Cuba, and Miami. The playwright was experiencing memory loss, eventually diagnosed as Alzheimer’s.

3. The third character in The Rest I Make Up is the camera. Memran is concurrently holding the camera and dialoguing with Fornes. Here, the camera becomes a medium of connection rather than a barrier to connection.

Memran’s portrait of Fornes is of a delightful, intelligent, passionate, creative, accomplished woman with a golden heart. Yes, Memran does confront the subject of memory loss, but in doing so it becomes clear that the above-mentioned qualities are still present—as words and time conduct Maria Irene Fornes to her passing.

The Rest I Make Up filled my memory with the feeling of a sparkling bright presence.