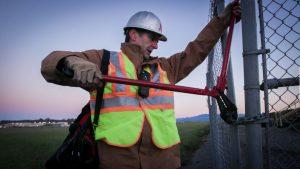 In my old age I’ve become a reductionist—reducing various and sundry matters to their essence. In the matter of our Earth’s environment, I make the analogy of a chess board. Us humans are the players—the board, our environment which supports the play. Us players are rapidly destroying our board. I reduce my emotional response to this destruction to one of pure pain.

In Lindsey Grayzel’s The Reluctant Radical I have found a brother I didn’t know I had. His name is Ken Ward. He practices civil disobedience in support of our environment. His specific focus is stopping our consumption of fossil fuel. His quixotic goal is saving our ecosphere.

The narrative spine of the film is a trial in which Ward has been charged with a felony for having shut down a tar sands oil pipeline. The film’s substance includes a bit about Ward’s personal life, his path to civil disobedience, and his reflections on his role as an activist. Regarding his personal life, I was most moved by Ward’s relationship with his son, Eli—and with Eli’s strong character.

The Reluctant Radical is the most striking environmental documentary I’ve seen to date—and I have seen plenty.

It is an absolute must-see.

Note: To learn more about climate activism visit Shut It Down.