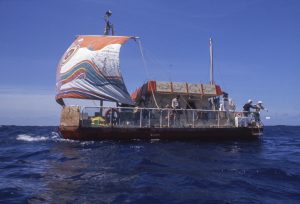 The Raft is a documentary film about one man’s folly of an ocean odyssey, and the unanticipated results of same.

Mexican social anthropologist Santiago Genovés designed an ‘experiment’ to address—and forgive me for being inarticulate here—something about humans, peace, and violence.

On May 11, 1973, Genovés and ten carefully chosen people set out westerly from the Canary Islands on a raft across the Atlantic ocean, destination Mexico.

I am not clear on what kind of a results he was seeking. He went through the motions of tracking and recording some data regarding his human guinea pigs’ behavior on this

journey, but he seems to have made a few flawed assumptions the central one being that somehow he was not a guinea pig in his own experiment.

Director Marcus Lindeen’s film approaches this story from two perspectives the first of which is the cornucopia of archival footage of the 101 day voyage on a craft without a motor—subject only to ocean currents and winds.

The second perspective is a contemporary model of the raft crafted for the film, and peopled by the six survivors of the voyage who share with each other the happenings on the raft, as well as their thoughts and feeling about these events. 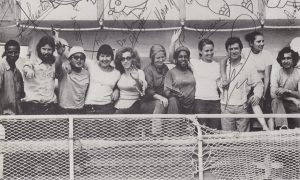 My friends will attest: I am obsessively concerned with ‘spoilers.’ Rather than tell you what happens on the ocean, I encourage you to see this brilliant documentary film that keeps its viewers glued to the screen.

The film will be released on VOD and home media on May 19.