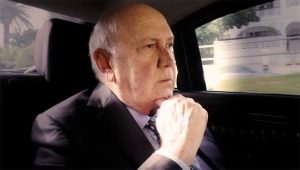 Written, produced and directed by Nicolas Rossier, The Other Man tells the story of the end of South Africa’s apartheid government in the early 1990s. Instead of the usual focus on Nelson Mandela, the story is told from F.W. de Klerk’s perspective. He was the last President of South Africa under its apartheid regime.

Rossier tells both a political and personal story. de Klerk’s personal changes during that time mirror the momentous changes the people and government of South Africa underwent. The film explores the role de Klerk played, and leaves the viewer with questions. To what extent was de Klerk leading or following? Did his acts of commission and omission minimize the loss of life during the transition or exacerbate it?

Whatever the answers—which, ultimately, can only be conjecture and subjects of debate—it is clear that de Klerk’s participation was crucial, and that his story deserves telling.

In historical documentaries, I consider ‘Extras’ to be part and partial of the film itself. The Other Man is no exception.