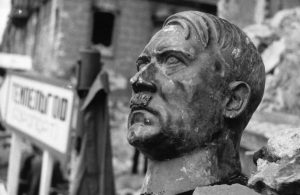 “Humans are animals who kill other animals of the same species. They also develop the opposite, because we are herd animals. So, we develop sympathy, and love and collaboration and so on because a herd cannot exist without that. And so there are two conflicting elements in all of human society, and all attempts to fight the kind of Hitlerism that we are discussing here are really the attempt to strengthen one human reaction against another human reaction.

“When somebody’s the President of the United States the authority is total.”
Donald Trump

Directed by Petra Epperlein and Michael Tucker, based in part on Sebastian Haffner’s book The Meaning of Hitler, and narrated by Matilda Tucker, the documentary, The Meaning of Hitler, is a focused review of Hitler’s impact and fundamental role in the massive carnage of World War II. As a matter of course, the film includes a cornucopia of archival material as well as contemporary footage of the current re-rise of fascism in Western nations.

The film presents a large number of thinkers on Hitler’s role in World War II and the Holocaust. The film’s first speaker, Martin Amis, makes an immediate connection between Donald Trump and Adolf Hitler. Trump appears a few times throughout the film. And as a matter of course, the film includes a cornucopia of archival material as well as contemporary footage of the current re-rise of fascism.

One third through the film we meet David Irving—historian, holocaust denier, anti-Semite, and racist. In his feeble attempts to separate Hitler from the atrocities of his own doing, Irving takes people on ‘real history’ tours in Poland in his quest to absolve Adolph Hitler of the massive damage he caused. Once introduced, Irving appears a few more times throughout the film.

The Meaning of Hitler is a superbly crafted documentary film that reminds us of the choices human beings are obliged to intentionally or capriciously make.

(Photo courtesy of ‘The Meaning of Hitler’)