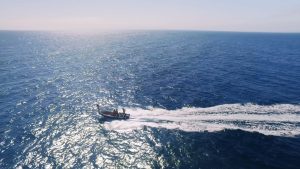 With The Loneliest Whale prolific filmmaker Joshua Zeman took on a very long bet with his latest shot—to seek and find a virtually legendary whale called ‘52’—or, as the above title suggests, a forlorn whale which may or may not now exist.

A presumed cross between a blue whale and a fin whale, this whale had—or has—a call-out frequency of 52 hertz. This frequency is the only possible frequency for this whale. There was strong evidence that such a whale exists or existed. However, oceanographer Dr. Bill Watkins who discovered ‘52’ passed away many years ago before he could provide formal documentation to the scientific community.

The ‘loneliest whale’ became an international legend which included the belief that there is only one ‘52’ left in the oceans. Zeman wanted to search for and find this ‘52’ despite the gargantuan odds. He gathered a highly qualified team, and went to work. As luck would have it, there was information that suggested if ‘52’ exists now, she or he may be swimming the Pacific region along or near the southern California coast, wouldn’t you know.

Zeman and many others see something more to this story than taxonomy. The film’s ultimate overarching theme is isolation and connectedness. We anthropomorphize at the thought of this whale’s aloneness and disconnectedness, as we ponder our own.

A Bleecker Street film, The Loneliest Whale is an expertly crafted documentary that keeps viewers thoroughly engaged from beginning to end. Kudos to the filmmakers who are also pointing out via this film the ongoing degradation of our oceans.

The film’s music is composed by Alex Lasarenko and David Little.