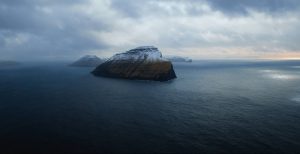 Commonly called the Faeroes, the Faroe Islands lie smack-dab between Iceland and Norway. Humans have lived in the Faeroes for about two millennia. Today’s 48,000 humans are self-governing, but do so under the aegis of the Kingdom of Denmark. The people have their own language, Faroese, and Danish is taught in schools. They live in a technologically modern society, and secure foods from the sea for their consumption and economy.

Produced, directed, and shot by Mike Day, The Islands & The Whales explores a dilemma faced by the people of the Faroe Islands. The seas and lands of Earth have been and continue to be polluted with mercury and, of course, many other chemicals. Ubiquitous mercury pollution comes primarily from the mining and burning of coal.

The far-north Faeroes are not suitable for agriculture. The people maintain the millennia-long tradition of hunting pilot whales. They keep their eyes on the ocean, and when a group of whales are spotted there is an island-wide alarm, men sprint to their boats, and if they’re ‘lucky,’ they’ll herd the pod to a cove, and slaughter the creatures. The islands are linked by underground tunnels, and the men communicate now with phones. That is, there is a rapid, country-wide response when a pod is spotted.

There is a broader issue: Bird and fish populations are being decimated by both hunting and environmental toxins.

A distinguished professor who has monitored mercury levels in whales and humans for 25 years has the unhappy, difficult job of informing the Faeroes’ people that they—especially their children—are being poisoned. His life has been threatened for informing the islanders of this sad, predictable fact of life. This is the central dilemma of the film—one which the entire human population of Earth is facing every moment.

Day covers daily life and community events, follows a few islanders on their hunts, listens to a few people share their opinions and experiences. He peppers the film with beatific, utterly stunning images of the islands, as he does with narration by an elder who speaks of the ‘huldufólk’ a kind of nature spirit who supports humans—but have ‘fled the light for the hills.’ They do not approve of man’s destruction and pollution of the land.

The Islands & The Whales is a masterfully crafted documentary film that reveals and explores our human defenses, fears, and ignorance as we approach our destruction of our ecosphere. I will make sure to see all of Mike Day’s films.