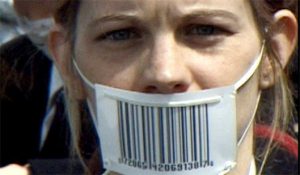 Directed by Mark Achbar and Jennifer Abbott, and based on the book The Corporation: The Pathological Pursuit Of Profit And Power by Joel Bakan, the film’s epic 145 minutes tell the story of the takeover of American democracy by businesses, leaving the name, ‘corporatocracy,’ the most accurate description of the United States’ form of national government.

The film includes the obligatory coverage of individuals fighting the takeover, and a couple stories of people taking back their power – a Bolivian town, for instance, taking back their water supply from Bechtel Corporation, at a cost of six lives and hundreds injured. But, the filmmakers did such a great job of demonstrating the destructive nature of corporate power, it leaves the viewer with the experience of overwhelm as to what can be done.

Again, this is before Citizens United opened the flood gates to money in politics even wider, creating an unimaginably larger flow than was already legally permitted.

I am not writing this review, though, to discourage you from seeing the movie. I’m writing it to urge you to see the film, to share it as much as you can. It will take large numbers of people, obviously, to break the stranglehold corporations have on our government and society. Every viewer counts.

The Zeitgeist Films DVD includes many Special Features, and the case includes a second DVD of extended versions of the interviews.