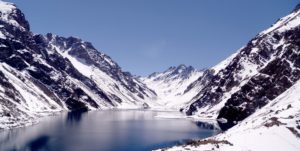 A ‘cordillera’ is an extensive chain of mountains or mountain ranges. Mountain ranges of this type have a complex structure, usually the result of folding and faulting accompanied by volcanic activity. In South America the ranges include numerous volcanic peaks.

The definition above is of a generic noun. Legendary writer/director Patricio Guzmán capitalizes the ‘C’ because he is referring to the specific Cordillera in his home country of Chile which he left when Augusto Pinochet became Chile’s dictator in 1973. Pinochet’s military junta slaughtered somewhere between 10,000 and 30,000 of the nation’s people during a 17-year reign of terror. The coup d’état was financed by the United States of America. It is this massively tragic event that has been the primary subject of Guzmán’s filmmaking career.

Released in 2019, The Cordillera of Dreams is a cinematic meditation on the stark contrast between the tragic political history of Chile, the socially and economically inequitable nation it has become, and the quiet majesty of the Andes Cordillera adjacent to the nation.

In addition to Guzmán’s own narration, he interviews a variety of people speaking about the Cordillera from a variety of perspectives. The film also features prolific Chilean filmmaker Pablo Salas who has been documenting the political and social life of Chile for four decades, mostly in the capital of Santiago. And, of course, there are a cornucopia of exquisite views of the Cordillerra.

Winner of the Best Documentary award at the 2019 Cannes Film Festival, The Cordillera of Dreams is distributed by Icarus Films.