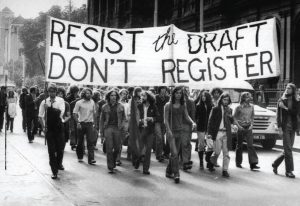 Harris is talking about his decision to resist the United States government’s ‘Selective Service System’ which administered the military draft in the 1960s and 70s. He decided to help end the now-debunked, massively tragic Vietnam war which killed three million Asians, almost 60,000 Americans, and wounded 304,000 Americans. Harris became one of the leaders of the national Draft resistance movement that hastened the end of the war.

An estimated 500,000 young male Americans resisted the Draft, 10,000 were indicted, and 4,000 were imprisoned—including Harris. Countless Americans protested the war, and organized resistance against the Draft.

In The Boys Who Said No! veteran documentarian Judith Ehrlich includes interviews of 30 activists about their roles in supporting ‘Draft Resistors’—as opposed to the propaganda phrase ‘Draft Dodger.’ In-between the interviews we see horrifying clips of the war, and a wide variety of inspiring clips of the national movement that ended the war—and the Draft.

The Boys Who Said No! provides a much-needed lesson that American people can make a powerful, positive difference in the government and culture of the United States.

The film is finely produced, and should be required viewing especially for aging teens and young adults—and for those of us like yours truly who were not paying attention.