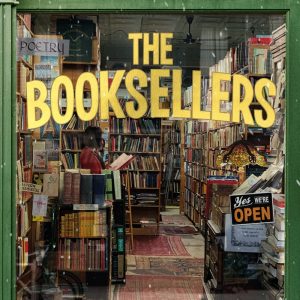 “People don’t have the patience to go look at a shelf of books like that. The average buyer wants to buy a particular book. I mean it takes a certain kind of interest in books to begin with to even arrive at the stage at which you want to be surprised by something that you want to find that you aren’t looking for.”
Interviewee

Although the title of this masterfully produced documentary film indicates that it is about those who sell books—in this case, with a central focus on rare book traders—D.W. Young’s The Booksellers is also about several other aspects of books and the people who love them.

The film was produced during a resurgence of used and antiquarian book stores in New York City. In addition to these stores and their proprietors, Young explores auctions, collectors, women in the book trade, hip-hop, diversity in the book world, and people who curate authors’ archives. Amongst other places, the filmmaker takes us to small dusty bookstores, a jaw-dropping private library, and a huge convention center of book traders and their customers.

A cornucopia of interviewees speak of their work, the impact of our cyber age, and, of course, the value they place on books. The legendary—in my opinion—Fran Lebowitz appears several times throughout the film.

The Booksellers has been well-reviewed by Variety and The Hollywood Reporter. It is the finest possible documentary film that could be produced on the topic of books and the people who love them.

Yours truly would love to find and purchase the cool jazz soundtrack by David Ullmann.

The Booksellers opened theatrically in New York, in March, and will launch in Los Angeles on April 17, as part of Greenwich Entertainment’s ‘Virtual Cinema Initiative’ at participating LA theaters—Laemmle Royal, Laemmle Monica, Laemmle Town Center 5, Laemmle Noho 7, Laemmle Glendale, and Laemmle Playhouse 7. Information and tickets will be available at BooksellersMovie.com

Access this site for more information on how to see the film.

“When I was young, novelists were much more important in the culture than they are now. I mean, to me, a book is the closest thing to a human being. That’s why I think that writers are like gods.”
Fran Lebowitz