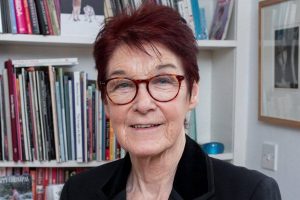 ‘In 1983, the people of Ireland voted to add the 8th Amendment to their Constitution giving the unborn an equal right to life to that of its mother. Ever since, abortion rights advocates have been fighting to overturn it.’

Directed by Aideen Kane, Lucy Kennedy, and Maeve O’Boyle, The 8th is an Ireland-based documentary film about that nation’s reversed stance on abortion. The directors cover a brief history of abortion in Ireland, and follow the hard-fought battle to abolish ‘The 8th’. Finely crafted, the film gives voice to both sides of the abortion issue—and joyously celebrates these new-found rights.

There are many heroes in this battle, but one stands out. Her name is Ailbhe Smyth. As head of the ‘Coalition to Repeal the 8th Amendment’ Smyth spearheaded the initiative that passed the legalization of abortion in Ireland. Smyth appears throughout the film sharing hope, passion, and wisdom.

At the moment the United States’ Supreme Court consists of six conservatives and three liberals—for want of better terms. In the background of environmental catastrophes and a pandemic that has destroyed or damaged countless lives—and continues to do so—there is a gnawing concern about what will happen when the Court inevitably rules that States may go their own way on the subject of legal, safe, and accessible abortions.

The 8th has not yet secured release rights for the film in the United States, though that release will likely happen within a matter of months. The film, however, is receiving strong coverage in the US festival circuit.

(photo of Ailbhe Smyth courtesy of ‘The 8th’)