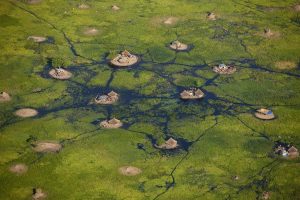 Directed by Yann Arthus-Bertrand and Michael Pitiot, written by Pitiot, Terra is a beatific, passionate, bold documentary about life on Earth. The film is narrated in French, with English subtitles, and available on Netflix.

The narration is spoken in the first person, and that person is the spirit of humanity.

The focus is on the history of life beginning with lichen, and concluding with humanity’s environmental crisis. The images are utterly spectacular—I’d love to see the film on Blu-ray or 4K—and the narration approaches the poetic.

The film inspires the viewer to identify with the beauty and grace of nature, of our planet—as well as to take responsibility for our destruction of its ecosphere. At film’s end there is the requisite, if not perfunctory, hint that we can still change course, stop the destruction, and regain balance. My spiritual and optimistic friends will castigate me for my pessimism—the recent Presidential election makes matters much worse.

One of the many places visited in this journey is Bangladesh, a nation of 160 million in the cross-hairs of global warming. As I received the images and information about this country’s vulnerability I thought of the current refugee crises in the Middle East—lives uprooted, tens of thousands dying. I then thought of the inevitable surge of environmental refugees and deaths. How will the nations of our world handle the displacement of tens of millions of human beings? Hundreds of millions?

I’ve seen way too many documentaries of this ilk to say that Terra is my absolute favorite environmental film. Let’s say it’s in my Top Five. No matter how many environmental documentary films you’ve seen, I cannot overstate the importance of seeing this one. The beauty of the images, the poetry of its narration put Terra in a category of its own.