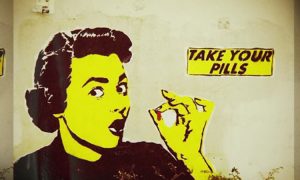 That’s the upside to the marketing and sales of prescription performance enhancing drugs. Alison Klayman’s Take Your Pills is an exploration of what we get for our money.

The primary focus is on Adderall and, secondarily, on Ritalin—as used by people who do not have ADHD or ADD. It is relatively easy to secure a prescription, however, without the actual presence of those syndromes. Students take these drugs to do school work faster and better—working adults for the same reason.

Klayman’s interviewees point out the plusses and minuses of what seems to be a ubiquitous use of these drugs by students and adults. At film’s end she takes a brief look at ‘nootropics’—nutritional supplements to enhance brain functioning—and ‘micro-dosing,’ the use of small doses of psychedelic substances to enhance job performance. ‘Brain hacking’ one interviewee calls it.

Researcher Martha Farah and company from the University of Pennsylvania decided to test the impact of Adderall on students’ cognitive performance. The study was done only on students without a formal diagnosis of ADHD or ADD. “It was across a huge battery of different tasks,” Farah states, “and in the end we found no significant difference between Adderall and placebo except for one question: Do you feel that the pill you took today enhanced your cognition?”

Yes, those taking the drug did feel their performance was enhanced—but the research showed no significant relationship between enhanced learning and drug-taking. The drug “boosts their false self-confidence in how well they’re learning,” another researcher concludes.

Whatever the motivations or rationales are to take what is nothing more or less than amphetamine—its use is deeply entrenched in various layers of American society. One interviewee predicts Adderall and its cousins will take opioids’ place in the media world when people finally develop opioid media coverage fatigue. However, from the information in Take Your Pills, in an end-stage capitalism world, I doubt controversy in the media is going to hinder its prescription and use.

Take Your Pills is a Netflix documentary film.